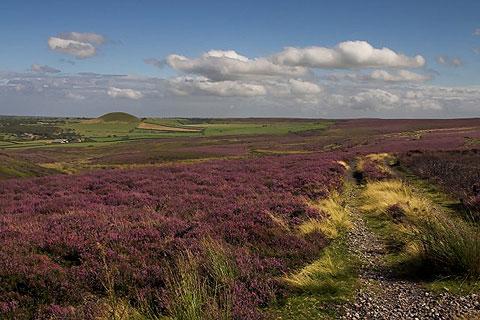 The Yorkshire Moors National Park is located in the county of North Yorkshire, in north-eastern England, with the North Sea and coastal resorts such as Whitby and Robin Hood's Bay to the east, and the Yorkshire Dales further to the west. The attractive city of York is to the south-west, while Pickering is the gateway town at the southern edge of the moors.

The landscape is characterised by large open areas of moorland, often covered with the heather that makes the landscape both distinctive and immediately recognisable. There are also large areas of open farmland and pasture, and agricultural activity in the valleys.

Rolling hills rather than mountains mean that the region has many fine viewpoints but seldom great difficulty in reaching them (the highest point is Round Hill on Urra Moor at 454 metres above sea level). 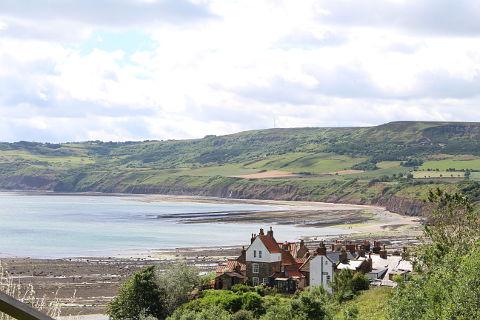 There are also large areas (approximately 1/4 of the Yorkshire Moors) that is covered with traditional mixed deciduous woodland, further adding to the diversity of scenery and wildlife found in the region.

An unusual scenic feature can be seen above Kilburn (south-west), where a white horse is carved into the hillside, while enthusiasts of the television series Heartbeat can head for Goathland, setting for the fictional village of Aidensfield. Its station was also used in the filming of the Harry Potter films. Nearby Grosmont, like Goathland, is also a stop on the popular steam train route of the North Yorkshire Moors Railway.

The picturesque town of Helmsley in the south-west is home to a castle and stately home (Duncombe Park).

Outdoors in the Yorkshire Moors

As with most of the National parks, walking and hiking are among the most popular activities. As well as numerous shorter trails you can follow the Cleveland Way around the Yorkshire Moors, or the Lyke Wake Walk across the heart of the region.

Cycling and mountain biking are also popular, with numerous tracks and small roads to follow.

Travel under someone else's steam! 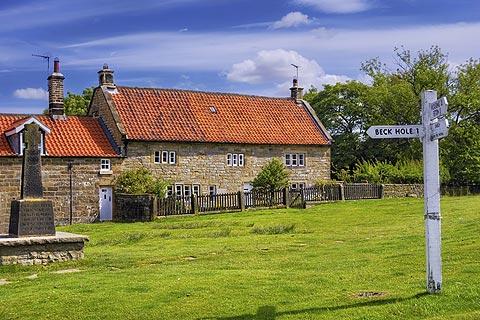 If walking and cycling sound a bit tiring or the children aren't keen a great way to enjoy the moors is to take the traditional steam train that runs between Pickering and Grosmont by way of Goathland and Levisham. Known as the North Yorkshire Moors Railway, the service is operated by enthusiasts of the age of steam and is a fun day for both children and adults - and one of the most popular attractions in the Yorkshire Moors.

Map of Yorkshire Moors and places to visit