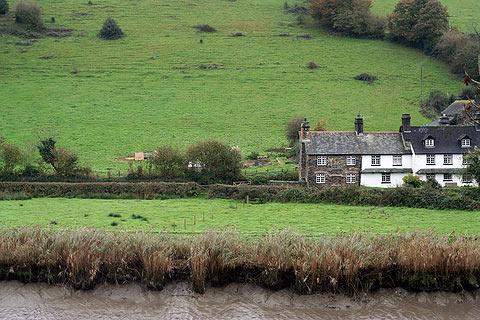 The Tamar Valley Area of Outstanding Natural Beauty (AONB) is found on the southern part of the border between Cornwall and Devon in south-west England, to the north and west of Plymouth and the south and west from Tavistock, and with Launceston to the north-west and Callington to the west.

There are no major towns within the region itself, but there are several smaller towns and villages in Tamar valley such as Dunterton and Horsebridge to the north; Gunnislake and Calstock in the central part of the Tamar Valley; and Saint Germans to the south-west...and many others besides.

Be sure to allow plenty of time to stop off for the occasional famous Cornish cream tea or a drink in a traditional village pub since these are among the highlights of a visit to this peaceful corner of England!

The main Tamar Valley Visitor Centre is at Drakewalls near Gunnislake.

Outdoors in the Tamar Valley: walks, cycle rides and boats

The Tamar Valley is a verdant green region of countryside, with pretty walks along quiet roads and lanes, small villages to explore, and lovely views from some of the higher points such as Pleasure Rock near Gunnislake. It is also a magnet for nature lovers drawn by the many species of animals, birds and flowers than can be seen amongst the meadows and along the river valley.

Cycling, horse-riding and boat trips along the river tamar are other popular ways to explore the countryside.

Another recommended way to explore is by following the 'Tamar Valley Discovery Trail' which follows 30 miles of the scenic highlights while the Tamar Valley Train or an organised boat trip provide also pleasant relaxing ways to enjoy the valley.

Some of the sites of interest to visit include:

Map of Tamar Valley and places to visit