The South Devon Area of Outstanding Natural Beauty (AONB) runs along the coast of southern Devon, between Plymouth and Brixham (neither of which actually falls within the AONB). Dartmoor National Park lies to the north. (There is a lot of overlap between the South Devon AONB and the South Hams region).

The region is mainly characterised by the coastline itself, and by the rivers that emerge along the coast and their associated valleys (River Dart and River Avon, also the Erme Valley). The area includes a landscape of 'traditional England' with small scale farming, pretty villages of thatched houses, long established fishing harbour towns, and also high quality beaches and sandy coves separated by dramatic cliff sections of coastline (eg Bolt Head).

It is the beaches that attract the most interest among visitors - of the many beaches to be found along this stretch of South Devon, those at Bantham, Bigbury on Sea, Blackpool Sands, Challaborough, Coryton Cove and busy neighbour Dawlish Warren, East Portlemouth and Mill Bay, Salcombe, Start Bay, Stoke Fleming, Teignmouth, Torcross (Spaton Sands) and Thurlestone are among the most popular. Most places hear are close to a good choice of Devon beaches, whether you are looking for a family-fun resort or a quiet cove with a secluded beach.

Don't overlook the interior during your visit where there is much to discover and explore, and numerous opportunities for walking, cycling etc in the peaceful countryside - try the Upper Avon Valley for a good introduction, or the walk from Dartmouth to Greenway along the Dart Valley.

Other highlights of a visit include the castles at Dartmouth, Salcombe and Totnes. 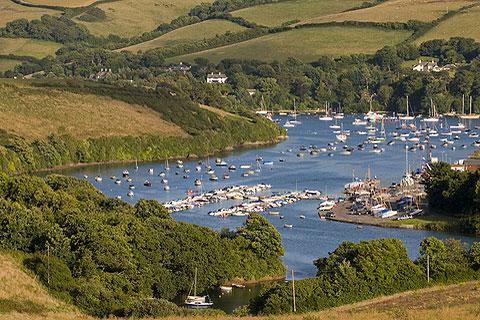 A few of the towns and villages that fall within the Area of Outstanding Natural Beauty (AONB) include (from west to east): Wembury, Brixton, Newton Ferrers, Yealmpton, Bigbury (and coastal neighbour Bigbury on Sea), Thurlestone, Salcombe, Kingsbridge, Stokenham, Strete, Stoke Fleming, Dartmouth, Stoke Gabriel and Kingswear. There are many others to discover during your visit. Brixham itself is surrounded by the AONB but does not form part of the designated region.

Larger towns lying along or outside the border of the zone include Plymouth, Ivybridge, Totnes and Torbay.

The AONB have produced an excellent guide to walking, with more than 30 graded walks to suit all levels described in some detail (including conditions, level of difficulty and length) and which included a good mix of countryside and coastline. See their website for details.

Map of South Devon and places to visit