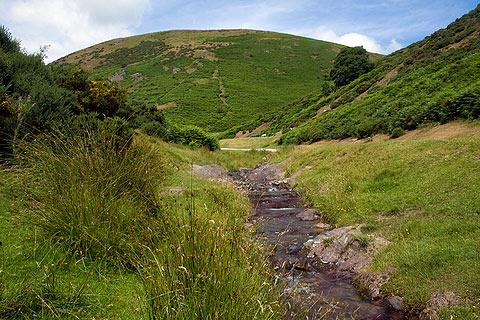 The Shropshire Hills Area of Outstanding Natural Beauty (AONB) falls within the county of Shropshire in western-central England - it occupies the south-western corner of the county, south of Shrewsbury and west of Ludlow, plus a thin band of land that stretches almost as far as Telford

The only built up areas within the AONB itself are Clun and Church Stretton, although Craven Arms is 'surrounded' by the Shropshire Hills and Ludlow itself falls close to its south-eastern border. Bishop's Castle and Cleobury Mortimer are other market towns in the general region but not within the AONB.

It is of course the countryside and outdoors activities that attracts visitors. The landscape is a mix of lower lying small-scale agriculture and small woodlands giving way to higher hills with more barren lanscapes in places. The Clee hills to the east of the AONB and the Stiperstones to the north contain most of the highest points in the Shropshire Hills.

Carding Mill Valley near Church Stretton is also very popular with visitors, as is the Wrekin near Telford - not the highest hill in the region but its proximity to large population centres make it a very well visited destination.

The most popular activities for those exploring the Shropshire Hills are walking and cycling, with horse-riding also being popular. There are many marked trails and suggested cycling routes for all levels of ability and in each of these varied landscapes - first stop if you are visiting to enjoy the outdoors should be the Shropshire Hills Discovery Centre at Craven Arms.

There is also a great diversity of wildlife to enjoy in the region, especially the opportunity to see the birds that live in the Shropshire Hills such as buzzards, falcons and grouse.

Some of the most popular visitor attractions in the Shropshire hills, excluding walking and other outdoor activities, include the castles at Ludlow, Clun and Stokesay. Ludlow Castle is a substantial castle dating from the 11th-14th centuries that overlooks the town of Ludlow; Stokesay Castle is really a fortified manor house, and is a very picturesque group of medieval buildings near Craven Arms; Clun Castle is a group of evocative ruins on a hill near Clun.

Map of Shropshire Hills and places to visit