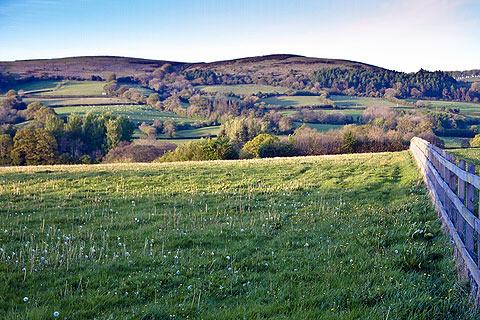 The Quantock Hills Area of Outstanding Natural Beauty (AONB) is situated to the west of the town of Bridgewater in Somerset, south-west England - it was the first area in England to be designated an AONB, in 1956. The north-west of the ridge of hills reaches the Bristol Channel at Quantocks Head while the southern end is at the Vale of Taunton Deane, about 15 miles to the south-east.

The nature of the landscape, a ridge of hills standing above verdant valleys and small farms, changes with the altitude - the fields and woodlands at lower levels giving way to gorse covered scrubland higher up. The relative high altitide of the Quantock Hills (in reality only about 250-275 metres above sea level), and their position near the coast, also mean there are great opportunities to enjoy extensive views from the higher points, such as Beacon Hill.

Outdoors in the Quantock Hills

The most enjoyable way to explore the Quantock Hills is slowly, perhaps on foot, bike or horseback, and there are plentiful trails and small roads available to meet all needs. It is possible to walk from one end of the ridge of hills to the other, and the region is also well known locally for the quality of its mountain bike routes.

The region is also proud of its association with Samuel Taylor Coleridge, the poet who lived in Nether Stowey for two years at the end of the 18th century, and literary enthusiasts might like to follow part of the trail named in his honour, the Coleridge Way (the trail leads 36 miles from Nether Stowey, eventually reaching Wheddon Cross and Porlock on the coast of northern Exmoor).

Towns and villages in the Quantocks

There are no significant towns that will within the AONB itself, but there are several attractive Quantock hills villages to be explored: Aisholt, Broomfield, East Quantoxhead, Nether Stowey, Holford, Stogumber, Bicknoller, Crowcombe and Kingston St Mary are among the most attractive but there are others also worthy of a visit, somatimes little more than a huddle of houses and perhaps a traditional village church, that you will discover when you visit the Quantock Hills.

Map of Quantock Hills and places to visit