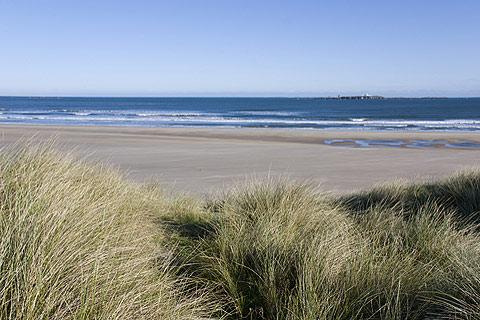 The stretch of coast that runs from Berwick-upon-Tweed to the mouth of the Coquet estuary covers 63 kilometres of coastline of north-east England, and has been designated an Area of Outstanding Natural Beauty.

The region is known for its quiet and very clean sandy beaches, backed by sand dunes, and for the islands just off the coast, such as the Farne islands and Lindisfarne. The islands and sand dunes along the coast features a wide range of wildlife, especially sea birds.

It is the quietness and quality of the beaches that will be one of the main things that strikes you - little need to battle among the crowds for a space even in the height of summer.

The region also contains some important castles and other important historical monuments, a consequence of the historical wars between the English and the Scottish.

The Coast on foot or bike

There is a popular trail that covers much of this stretch of coast, the Northumberland Coast Path, which is perhaps the best way to enjoy the scenery. The path runs from Cresswell to Berwick-upon-Tweed, and usually takes six days to complete (Cresswell - Warkworth - Craster - Seahouses - Belford - Fenwick - Berwick).

Cyclists are equally catered for with the Coast and Castles long-distance cycleway that follows the length of the region.

There are also numerous shorter walks and cycle rides for the more casual visitor seeking to enjoy the surroundings and wildlife.

Towns and villages of the Northumberland Coast

There are a few towns and villages in the region, including some of particular scenic and historic interest.

Map of Northumberland Coast and places to visit