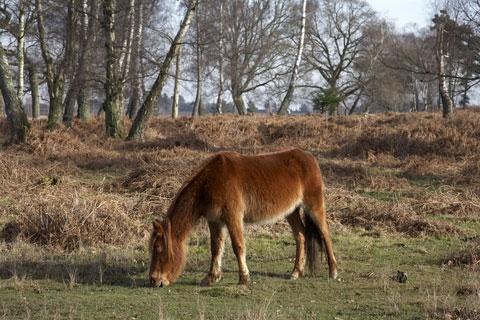 The New Forest is located in the south of England, west of Southampton and east of Bournemouth, and centred around the towns of Lyndhurst and Brockenhurst. It falls mostly in the county of Hampshire.

Above all it is the forest and countryside itself that is the big attraction, and simply cycling (bike hire is available in several locations), walking or horse riding in the region are perhaps the greatest highlights, enjoying the natural beauty of this designated English National Park.

The National Park covers 571 square kilometres, and was listed in 2005, a great success since it will help ensure the region's protection from the development that has affected so much of southern England.

The area was more densely forested at the time of its creation by William the Conqueror in 1080, and significant areas have been cleared over the centuries, particularly for naval shipbuilding and for use during WW1 and WW2.

This clearance of the forest has given rise to large areas of unfenced pasture, where he ponies are free to wander  - you will see lots of the famous New Forest ponies as you travel around.

There are now about 18,000 hectares of heath and 3,500 hectares of woodlands and forest. there are also substantial regions of low lying wet and marshy areas. Each of these environments contains a wide range of wildlife and there are protected reserves in many parts.

But there is much more to see and do than simply exploring the forest. There are lovely towns and villages to visit, along with some fine manor houses and gardens, and numerous ancient monuments and prehistoric remains that should certainly feature on your agenda.

Many visits to the New Forest start at Lyndhurst, roughly central in the National Park and with lots of information about the activities available at the tourist centre. Hythe and Lymington are among the popular coastal towns in the region, which also includes several attractive beaches. 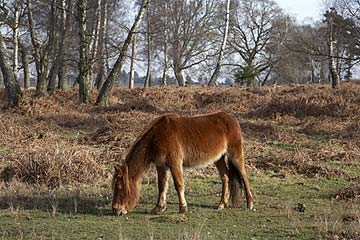 And remember - it's a place to relax. When you come across ponies, sheep or other animals in the middle of the road, it is them who have the right of way! In the summer especially, be very vigilant not to risk starting a fire.

New Forest villages and towns include:

There are numerous attractions in the forest, including a good selection of children targetted activities, houses and gardens, and small local museums. The following is a shortlist of a few favourites in the region:

Map of New Forest and places to visit