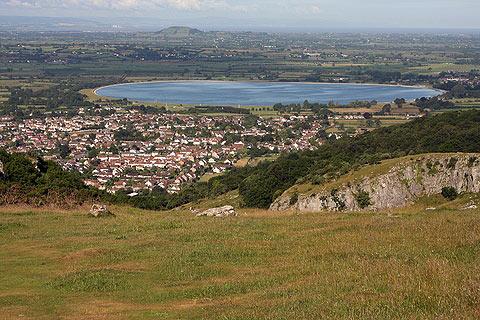 The Mendip Hills Area of Outstanding Natural Beauty (AONB) are situated in Somerset, south-west England, to the south of the towns of Bristol and Bath and between Weston-Super-Mare and Frome.

A region of open countryside, the Mendip Hills are best known for their attractive scenery, the hills and raised ground offering far-reaching views, and for the gorges that are found in the area. These characteristics have arisen because of the geology of the area - the Mendips are a limestone ridge about 75 kilometres east to west, which lends itself particularly well to erosion and cave formation that has created this unique environment.

Highlights include: Cheddar Gorge, Ebbor Gorge and Burrington Combe; the caves at Cheddar and Wookey Hole (the most interesting cave system in the Mendips); the summits of Brent Knoll, Crook Peak and Wavering Down. Three nature reserves are situated within the AONB, at Blackmoor, Velvet Bottom and Black Rock. Some of the best views are from Black Rock, the highest point in the Mendip Hills.

The Mendip Hills Visitor Centre is in the small village of Charterhouse, to the east of Cheddar and south of Blagdon.

The numerous caves have also acted as shelter to inhabitants for several thousand years. Centred around the Ebbor Gorge, many of the artefacts that have been found in these prehistoric settlements can be seen at the museum in Wookey Hole and there is an iron age fort at the top of Brent Knoll.

Outdoors in the Mendip Hills

Outdoor enthusiast will find plenty of walking and cycling opportunities in the Mendips. The Mendip Way is a 50 mile long pathway that follows the Mendip Hills from east to west, several other long-distance paths traverse the region, and there are many opportunities for shorter walks. The walk around the top of the Cheddar Gorge is also recommended.

One interesting idea is the Mendip Pub Trail, quite long at 45 miles but with the advantage of visiting six traditional pubs along the way - start your long but pleasurable trip at Hinton Blewett, north of Wells, then pass via Priddy, Axbridge, Bleadon, Rowberrow and Compton Martin!

Caving, potholing and climbing are also popular in the Mendips - there are many caves to be found in the limestone rock apart from the public ones at Cheddar and Wookey Hole.  Another pastime practiced here is cave diving - essentially scuba diving in water-filled underground caves - a sport reserved for the experienced!

Winscombe, Shipham and Blagdon are among the larger Mendip Hills villages in the AONB itself. Compton Bishop, Priddy and East Harptree are other highlights (see also villages along the Mendip Pub Trail, listed above under 'outdoors').

The town of Wells with its impressive 12th century cathedral is an attractive town to visit and the largest town within the Mendips (situated just outside the southern tip of the AONB). Glastonbury is nearby but not within the Mendip Hills Area of Outstanding Natural Beauty.

Map of Mendip Hills and places to visit