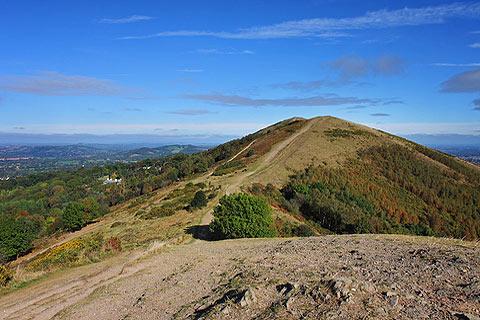 The Malvern Hills Area of Outstanding Natural Beauty (AONB) are situated largely in the English counties of Herefordshire and Worcestershire, and also partly in Gloucestershire, to the west of Great Malvern (within the general region of England known as the West Midlands).

The 'area of outstanding natural beauty' constitutes a strip of land about 15 kilometres long running north to south and following a ridge of hills, with several lower lying commons off to the east of the defined zone. Note: Malvern Water, a very popular bottled water, is sourced in the Malvern Hills.

The ridge along the hills is a very popular highlight of the Malvern Hills, which provide a very scenic mix of open hills and woodlands. Apart from the scenic attraction of the area itself, the hills are also notable because they are the highest point in the region and provide very far reaching views in all directions.

The highest hills are towards the north of the ridge at Worcestershire Beacon (425m), nearby Sugarloaf Hill (368m) and North Hill (397m), with End Hill (329m), Table Hill (373m) and Summer Hill (382m) also being towards the north. Prominent hills in the centre of the Malvern Hills AONB are found on the ridge around Pinnacle Hill (358m) and Jubilee Hill (327m). Continuing southwards Herefordshire Beacon (338m) is the highest peak, with several further hills towards the south at 200 - 300 metres above sea-level.

Activities in the Malvern Hills

Not surprisingly outdoor activities are the reason why people visit the Malvern Hills. Whether walking along the ridge or ambling along the lower slopes there are a wide range of options for hikers, and mountain bikes and horse riding are also very popular.

Most of the region is 'open access' so you can walk where you like, and the high location above Malvern and the surrounding countryside means that getting lost is unlikely, or you could follow one of the seven 'discovery walks' that have been designed to show the best the area has to offer. Another interesting way to explore is to follow the themed 'Churches and Churchyards of the Malvern Hills' tour and passes through various villages in the Malvern Hills.

Road cyclists have to content themselves with cycling along the roads below the hills, but don't worry the scenery is still very attractive!

Map of Malvern Hills and places to visit

See more places nearby in the Worcestershire guide