The Lake District is located in north-west England, around Keswisk and between Carlisle and Kendal, in Cumbria. The Lake District National Park was established in 1951 to help protect this important and beautiful region.

The region, most of which falls within the Lake District National Park, covers roughly 2,300 square kilometres, and contains many of England's highest mountains, numerous lakes, and some of the finest scenery to be found in England. 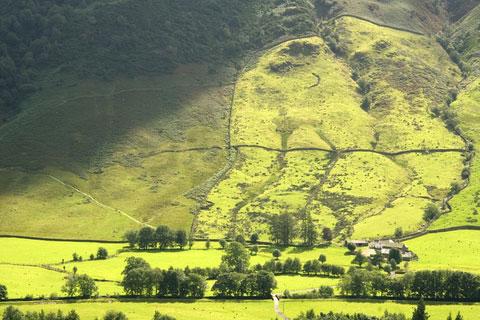 At higher elevations the terrain is more barren with rough scrubland and moorland interspersed by rocky outcrops and peaks. Of course it is the lakes themselves that define the region, and provide the perfect scenic backdrop to the mountains behind, as well as their own individual beauty and character.

Although already established on the tourist trail by the 18th century, it was perhaps William Wordsworth in the 19th century who contributed most to the inflow of tourists to the region, with popular travel guides and poems set in the Lakes. The children's author Beatrix Potter also lived and set stories here, further enhancing the popularity of the lake District as a visitor destination. You will find several attractions related to these authors during your visit. The opening of a rail line to Windermere in 1847 also played a significant part in increasing tourism to the region.

There are numerous lakes, both in the lower regions and hidden away in the higher parts of the Lake District. Some of the best known and most visited are

The largest towns and villages in the Lake District include Kendal (south); Keswick (central); Penrith (east) and Windermere (together with Bowness-on-Windermere the main town in the southern region, with numerous leisure facilities).

Some of the many smaller towns and villages in and around the borders of the national park include Ambleside, Appleby (full name Appleby in Westmorland, falls outside the eastern border of the National Park), Bassenthwaite, Caldbeck, Cleator Moor, Coniston (northern end of Coniston Water), Cockermouth, Glenridding (popular with hikers tackling Helvellyn), Grasmere, Hawkshead, Newby Bridge, Near Sawrey and Far Sawrey (best known for being home to Beatrix Potter - see Sawrey), Shap, Tebay, Ulverston and Wetheral. The village of Ravenglass is the only coastal village in the Lake District National Park 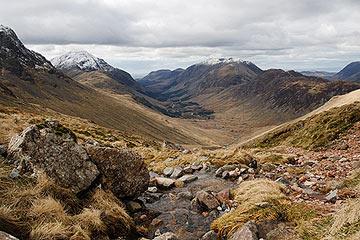 The four highest peaks in the Lake District are over 3,000 feet and hence generally classified as 'mountains' in the UK. These are:

There are more than 50 other peaks of over 2,500 feet (762 metres) in the National Park, and an almost unlimited number of options for exploring them, with the lakes often below as stunning backdrop.

Note: the photo shows a typical Lake District mountain landscape with snow-capped peaks during an ascent of Great Gable.

Essentially an outdoors destination, the Lake District is attractive to walkers, climbers, cyclists (both road bikes and mountain bikes), and those who enjoy water sports such as sailing, canoeing and kayaking and fishing. There are also many interesting and picturesque towns and villages to enjoy, and numerous 'tourism' related activities.

Weather in the Lakes is variable, but often wet and windy and with frequent fog especially on the higher ground. So be sure to visit, but come prepared for possible cold and wet weather. Consider it an extra-special treat if you find you also have glorious weather during your stay!

The main Lake District information centres are found at Bowness Bay, Keswick and Ullswater. There are also several small local information points, typically the shop or post office in a smaller town or village.

Walking in the Lake District

While there are many challenging walks in Lakeland for which you will need the correct equipment and to be well prepared (suitable clothing, maps, compass, water, emergency provisions etc), there are also lots of easier and low-lying pathways, and the more popular destinations also have wheelchair and pushchair-friendly walks marked out. The local information centres have detailed information about these, and there are several books available with full details.

Photos of the Lake District

Warning: No images in specified directory. Please check the directoy!

There are many family-oriented activities to enjoy in the Lake District in case you can't tempt your children to head for the mountains...these include Beatrix Potter's house; taking steamer rides on Windermere and other lakes; and the Visitor Centre at Brockhole (between Ambleside and Troutbeck Bridge) has a substantial adventure playground, gardens, displays and other activities in an attractive setting overlooking Windermere. If you fancy a change of scenery head perhaps to the south of the Lake District to visit the gentler landscapes of the Cartmel Peninsula.

Map of Lake District and places to visit