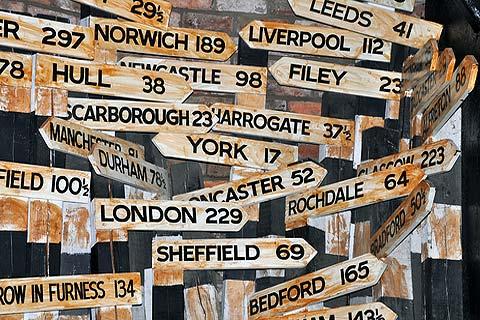 The Howardian Hills Area of Outstanding Natural Beauty (AONB) can be found in the county of North Yorkshire, England, in the centre of the region marked by Thirsk, Pickering and York. The towns of Helmsley and Malton are situated just outside the boundaries of the AONB (north and east respectively) but the region itself contains no major settlements - although there are several traditional villages in the Howardian Hills region.

The landscape of the Howardian Hills consists of farmland separated by areas of gently rolling countryside and wooded areas, with a scattering of stone famhouses and small villages such as Nunnington, Hovingham, Welburn and Terrington and is a quiet very scenic region to explore.

Outdoors in the Howardian Hills

Cycling and horse-riding are also popular on the quiet bridleways and roads in this moderately undiscovered area of England.

Stately Homes and Castles in the Howardian Hills

The region is very well endowed with impressive stately homes and castles, typically surrounded by extensive lands and gardens. Among the highlights:

Duncombe Park (a substantial country estate and gardens) and Helmsley Walled Garden each stand just outside the northern edge of the Howardian Hills AONB and are also recommended when you are visiting this part of Yorkshire.

Map of Howardian Hills and places to visit