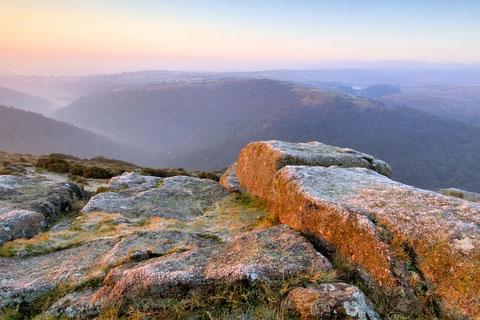 Devon is situated in south-west England, with Cornwall to the west and Somerset and Dorset to the east. One of the most popular tourist destinations in the country, Devon has something for everyone whether searching for a busy seaside resort and beach holiday, stunning coastal cliffs, quiet villages in lovely scenic countryside, or the chance to explore one of the more wild moorland areas.

Historically focussed on farming, over recent decades Devon has come to rely heavily on tourism for its income - happily it has a great deal to appeal to the visitor!

There are numerous towns and villages that fall within Devon, and the small traditional villages, often with small thatched cottages, form a significant part of the appeal of a visit to this 'very English' part of England. See further down this page for some of the most popular.

The impressive town of Exeter is the administrative capital of the county, while Plymouth and Torbay are also important population centres and visitor attractions (Paignton, Torquay and Brixham are the three resorts that make up Torbay and are known together as the French Riviera).

The heart of Devon is essentially rural, and the larger towns tend to fall nearer the coasts, with Brixham, Dartmouth, Exmouth, Ivybridge, Kinsbridge, Paignton, Salcombe, Sidcombe, Torquay and Totnes being to the south and Barnstable, Great Torrington, Bideford and Ilfracombe to the north.

As 'evidence' of the natural beauty of Devon, the county contains two National Parks, four Areas of Outstanding Natural Beauty and a UNESCO listed coastline

The Jurassic Coast includes the eastern part of southern Devon. Unique in England, this designated heritage site is a scenic mix of ancient cliffs, welcoming beaches and coves and traditional harbour villages - see Jurassic Coast. Part of the Cornwall and West Devon Mining Landscape designated heritage site also falls within the county. There is a designated UNESCO Biosphere Reserve at Braunton Burrows in the north of Devon.

There are four designated areas of outstanding natural beauty in Devon, three along parts of the coast and Blackdown Hills in central-eastern Devon. The Tamar Valley AONB also falls on the border between south-west Devon and Cornwall.

Map of Devon and places to visit