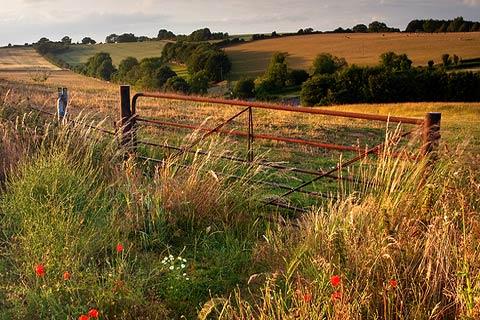 The borders of the AONB are roughly denoted by Warminster to the north, Wilton and Salisbury to the east, Shaftesbury to the west and Fordingbridge and Blandford Forum to the south, although these towns each fall just outside the designated area. There are numerous smaller villages in Cranborne Chase region itself and in the adjacent Blackmore Vale.

Largely consisting of rolling hills and chalk escarpments, the region is divided by gentle river valleys and also has areas of ancient woodland (such as Groveley Wood and Great Ridge Wood, both in Wiltshire). The countryside here is primarily agricultural and the open nature of the landscape - giving attractive views across large areas of open countryside - makes it very attractive while the extensive selection of stately homes and other important attractions and monuments means there is a great deal for the visitor to enjoy.

There is a great deal to discover in terms of history and heritage when you visit Cranborne Chase & West Wiltshire Downs. Among the most important of these sites are Longleat (a very lovely stately house and parkland and a popular safari park); stately homes at Kingston Lacy, Breamore House, Wilton House and Stourhead House (Stourton); 14th century Wardour Castle (Wiltshire); the Victorian gardens at Larmer Tree (the stately homes mentioned each also feature stunning gardens).

For those who prefer to explore the open countryside enjoying the wildlife, several areas have been designated as nature and wildlife reserves. Avon Heath Country Park is a very large area in Dorset, while Ashley Wood Wildlife Reserve is a good place to discover the woodlands of the region. For impressive views and a chance to enjoy seeing butterflies perhaps head for Fontmell Down Wildlife Reserve or the Martin Down Nature Reserve.

Outdoors in the Cranborne Chase and West Wiltshire Downs

As with most areas of natural beauty, exploring on foot or by bike is evry rewarding and the best way to appreciate the natural environment. The options for both cyclists and hikers are too wide to list here but there are numerous possibilites, routes and marked trails to follow whichever part of the AONB you are visiting.

Map of Cranborne Chase and places to visit