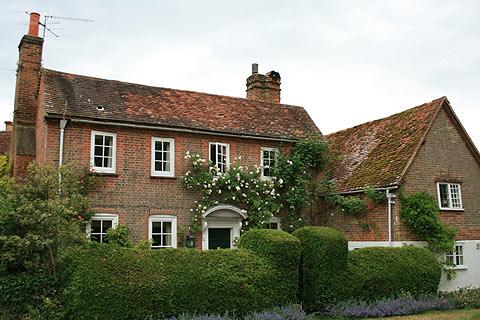 The Chilterns (full name Chiltern Hills) Area of Outstanding Natural Beauty is located in south-east England, north-west of London between Goring (just north-east of Reading) and running north-east to the border with Hertfordshire near Luton - a distance of over 100 kilometres in length, but seldom more than 10 - 15 kilometres wide.

They fall within four of the central-southern English counties: Bedfordshire, Buckinghamshire, Hertfordshire and Oxfordshire.

The landscape is of gentle rolling chalk hills, dotted with agriculture (mainly small scale), woodlands, hedgerows and small traditional English towns and villages. The Chilterns regularly take the number 1 spot in polls of the best place to live in Britain.

The most picturesque way to explore the region is on foot - perhaps following part of the Ridgeway Long Distance Path, or one of the many shorter walks in the region. In springtime the bluebell walks through the Chiltern woodlands are especially attractive.

Popular alternatives include cycling, both on the roads and on the permitted mountain-biking routes, and on horseback.

There are 2,000 kilometres of trails available, to suit all levels of ability and enthiusiasm, including some that the local authorities have highlighted as 'stile free' or 'wheelchair and pushchair friendly'.

A visitor centre is located at Dunstable Downs, centrally placed in the region.

The nature of the soil - clay and flint - has defined the appearance of the local architecture - usually brick, occasionally flint, and also frequent use of flint for decorative purposes. Some of the most beautiful villages in the Chilterns include:

Also worth a visit are:

Towns and villages around the edges of the region include Amersham, Beaconsfield, Berkhampstead, Chesham, Goring, Henley-on-Thames, Tring, and Walingford.

Apart from the pleasures of walking, exploring, and finding a traditional english pub to enjoy a drink, there are numerous buildings of historical interest in the Chilterns. Many other attractions may go unremarked - a particularly attractive church, or a lovely setting for an ancient inn (try also the King's Head in Aylesbury, a National Trust inn) - but will also form a highlight of your visit.

There are various important castle remains, manor houses and gardens that can be visited, including:

The Chilterns have always been popular because of its excellent walking, beautiful villages and some really fantastic village pubs. However BBCs 'Midsomer Murders' television programmes, most of which are filmed in the Chilterns, has started a new wave of visitors on the Midsomer Murders trail.

The Chilterns are home to Chequers, the Prime Ministers country residence. It is situated at the foot of the Chiltern Hills south of Aylesbury.

Map of Chilterns and places to visit