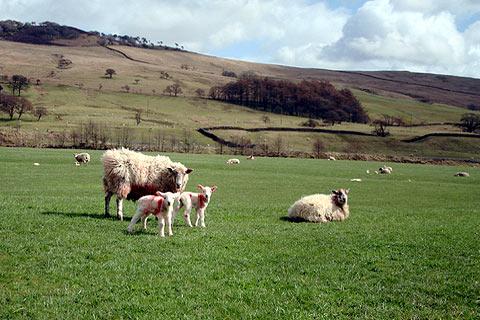 The Forest of Bowland Area of Outstanding Natural Beauty (AONB) occupies a substantial part of northern Lancashire and a small part of North Yorkshire).

Despite its name, the region covered by the Forest of Bowland is largely open moorland with rocky outcrops and wild heather, while the lower valley areas have areas of woodland, fields separated by stone walls and traditional sheep and cattle farms. There are also several picturesque villages in the forest of Bowland such as Hurst Green, Bolton-by-Bowland, Downham and Barley (near Pendle Hill), Chipping and Slaidburn. (The name 'forest' was traditionally applied to areas used for royal hunting, whether tree covered or not).

The Forest of Bowland Visitor Centre is found in the town of Clitheroe to the south of the AONB and is a popular base for visitors.

The valleys between the fells contain the rivers that traverse the Forest of Bowland, with the Hodder and Ribble Rivers being the most important. The Ribble River Valley divides the area into two parts, with Pendle Hill being separate from the main AONB.

It is to the higher parts of the fells that visitors should head to best appreciate the natural beauty (and wilderness) of the region, and also for some exceptionally far-reaching views in all directions, including the Lake District and the coast of Lancashire. The highest point in the forest of Bowland is at Ward's Stone, at 561 metres above sea level.

Many trails exist across and between the fells, and much of the area is also now classified as 'open access' land, making it very popular with hikers - although notably less visited than some of the more 'popular' National Parks in northern England. The walks that follow the Hodder and Ribble Valleys are also very scenic and popular. You can download details of many of the most popular walks at Forest of Bowland leaflets.

Stocks Reservoir and Gisburn Forest are among the most visited 'managed' areas within the Bowland Forest: Gisburn Forest has several marked trails for hikers, mountain bikes and horses.

If you prefer a themed route for exploring, one popular route for visitors follows the history and route taken by the Pendle Witches, a group of local villagers who were tried and executed as witches in 1612; while the Ribble Valley Sculpture Trail features sculptures by local artists set in the natural environment.

An attraction popular with families is the Bowland Wild Boar Park, a chance to see wild boar, and lots of other animals such as llamas, and with various children-focussed entertainments such as feeding the animals.

Map of Forest of Bowland and places to visit

Forest of Bowland places to visit