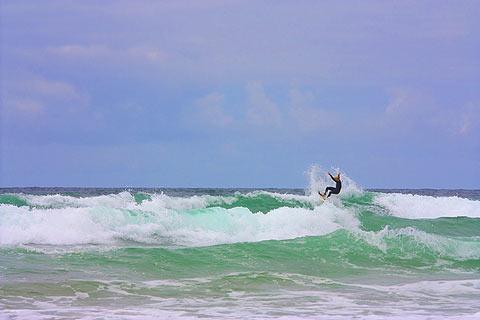 Watergate Bay (previously Tregurrian Beach) is a popular beach in Cornwall situated a couple of miles to the north of Newquay.

It is best known for the two mile long beach itself, and for the excellent surfing conditions it provides - among the best in the UK. This is because the bay faces north-west into the Atlantic. Surfing lessons are also available.

The beach is a popular sandy beach, backed by cliffs in a very attractive setting, with headlands at both ends worth exploring (Stem Point to the north, Trevlegue Head to the south) as part of a walk along the coast path (part of the south west coast path that follows most of the Cornwall and Devon coastline, so you can walk as far as you like...).

Unlike many Cornish beach resorts the beach at Watergate Bay isn't backed directly by a village, but there are tourist amenities including a restaurant founded by Jamie Oliver called Fifteen Cornwall and the highly rated Watergate Bay Hotel. If that is beyond your budget there is also a caravan and camping park close to hand at Tregurrian village.

Map of Watergate Bay and places to visit