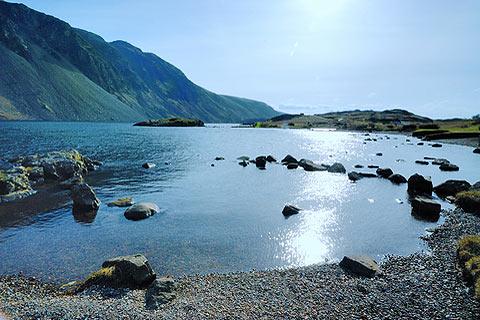 Wastwater in Wasdale is situated a little to the west of the central Lake District region, and is about three miles long and less than half a mile wide. It is also often spelt as Wast Water.

The lake is in a location that is scenic even by Lake District standards, and set amidst some of the highest mountains in the region such as Scafell, Scafell Pike (the highest peak in England), Great Gable, Red Pike and Kirk Fell. In a recent television programme to vote the 'best view in Britain' it was the view across Wastwater with the mountains behind that came in first position.

Wastwater runs roughly north-east to south-west, with the mountains of the south-eastern shore consisting of large banks of scree (loose rock) - the path alongside this edge of the lake is very popular and will take you across these scree banks.

There are many lovely viewpoints both from around the shore and across the lake from the hills high above, and despite its great beauty Wastwater also remains a bit insulated from the volumes of tourists that are found around Windermere.

Some of the most popular hiking routes to the higher mountains start from Wasdale Head, a small village at the northern end of the valley containing Wast Water. Wasdale Head is also home to what is said to be the smallest church in England, dwarfed by the large yew trees that surround it.

Map of Wast Water and places to visit