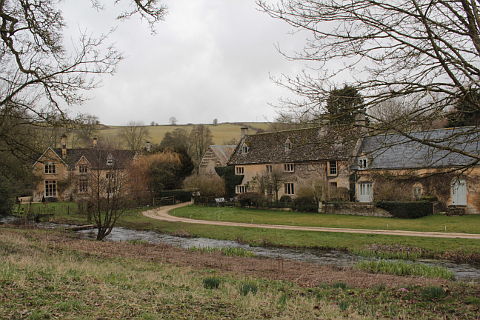 Upper Slaughter is a very scenic village to the north of Bourton-on-the-Water and south-east of Stow-on-the-Wold, in the Cotswolds county of Gloucestershire. It is a short way north of the attractive neighbouring village at Lower Slaughter.

The village is small yet perfectly formed. It is considered a little less picturesque that its southern neighbour - hence it attracts fewer visitors than Lower Slaughter. Lower Slaughter does have a river running through the centre however we were utterly charmed by Upper Slaughter and it remains one of our favourite Cotswolds villages.

Take the path between Upper and Lower Slaughter (less than 2km distance) for the best way to appreciate the area, or even walk to both from Bourton-on-the-Water - it's not far and well worth the effort. 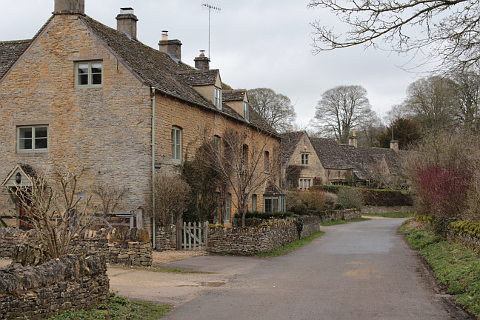 Nothing much remains of the castle that was once the focus of Upper Slaughter. The village is now centred around the 12th century Saint Peters Church and graveyard, and an open square surrounded by attractive traditional houses in the trademark yellow stone. The slow moving River Eye and a sprinkiling of stone footbridges are the 'finishing touches'.

Be sure to allow time to amble around absorbing the atmosphere and enjoying some of the architectural detail featured on the buildings - the mullioned windows on the Old School House for example.

Several of the properties were restructured by the well known architect Sir Edward Lutyens about 100 years ago (full marks for a fine and sympathetic job!), while others are unchanged since much earlier. One of the finest houses in the village is a beautiful manor house dating back to the 15th century with an Elizabethan front. Upper Slaughter Manor is open for visits for 3-4 weeks during the summer. 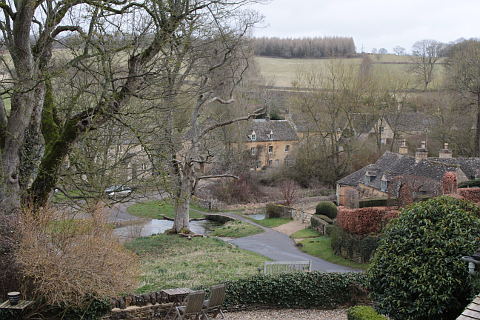 Also in the village is Eyford house which was voted the "favourite house in the UK" by Country Life magazine in 2011.

A recent spring visit to Upper Slaughter meant we could see and hear the young lambs behind the working farm at the bottom of the village adding to the quintessential charm of the village.

Note: the name 'Slaughter' is derived from an ancient word 'slohtre' meaning 'muddy place' and has no connection with 'slaughter' or anything else of that nature!

Neighbouring Lower Slaughter is another lovely village and the there is an easy walk between the two villages. Lovely on a summer's day! Bourton-on-the-Water is also nearby. Its lovely waterside setting and cafes and restaurants attract a lot of visitors in the summer.

Burford is a small town which has been voted "prettiest High street in the UK". It has a good range of pubs and cafes and would make a good base for a Cotswolds trip.

Map of Upper Slaughter and places to visit