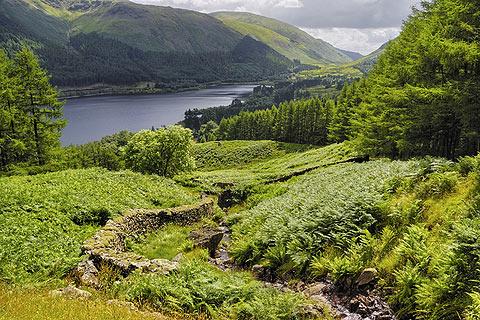 The main settlement on the borders of the lake is Glenridding, at the southern end of the lake while smaller villages include Patterdale and Pooley Bridge (to the north of Ullswater).

A popular excursion on the lake itself is take a trip on one of the 'steamers' (nowadays diesel-powered) that travel around the lake, making various stops en route at Glenridding, Pooley Bridge and Howtown - take the boat to Howtown and then return to Glenridding on foot along the lake edge for a lovely trip, or just settle down for a 2 1/2 hour 'round the lake trip' (cost about £12 for a day pass that allows you to get on and off at your convenience - see Ullswater Steamers for details)

Other activities around Ullswater

As well as the steamers the lake is also sizeable enough to attract large numbers of yachts and other boats, and boats can also be hired by visitors to further explore the lake.

Not surprisingly Ulswater is also popular with visitors, not just because of the scenic attractions of the lake itself, but because of the walking opportunities in the surrounding mountains, including the chance to climb Helvellyn, the third highest mountain in England. One of the Lake District's most impressive waterfalls, Aira Force, is found half a mile from the western shore of Ullswater and can be accessed by road.

Map of Ullswater and places to visit