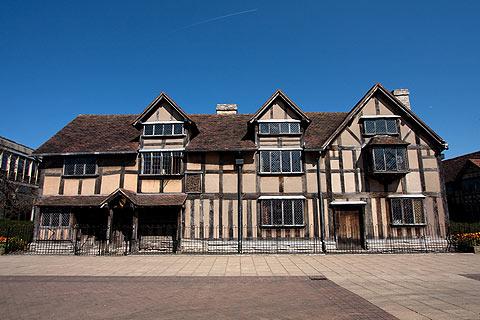 Stratford-upon-Avon is a historical town in central-southern Warwickshire (itself in central England), just outside the northern boundary of the Cotswolds.

The town has a great deal to commend it - historical charm, substantial medieval period architecture, riverside setting - and all these would ensure Stratford-upon-Avon that would attract visitors even if it were not for its main 'claim to fame': Stratford is also the birthplace of William Shakespeare - a fact which attracts millions of the Bard's followers from around the globe to explore the town.

Your visit to Stratford-upon-Avon will take in several particular highlights: Shakespeares birthplace and the associated Visitor centre next door; the High Street with a multitude of half-timbered Tudor houses; Shakespeare's school; Halls Croft and the Holy Trinity church; the Gower Memorial and Bancroft Gardens, and Nash's House (Shakespeare's home in later life).

The centre is quite compact and it is easy to explore on foot - the main streets to follow are Bridge Street, High Street (including the 16th century Harvard House, owned by harvard University and open to the public in tribute to John Harvard); Chapel Street, Church Street and Old Town, while Shakespeare's birthplace is on Henley Street at the end of Bridge Street. As well as admiring numerous impressive Tudor buildings (including several pubs) you will also find a wide range of shops (including bookshops and gift shops) and other facilities as you explore, and some picturesque stretches of river to stroll along. (Note: quite a few of the 'Tudor' frontages, such as that of the Shakespeare hotel, are 20th century reproductions rather than authentic tudor half-timbered frontages).

Shakespeare's Birthplace: the highlight of a visit for enthusiasts, the house is open to the public and very simply furnished to retain as much authenticity as possible. Tickets are about £12 each - but how can you visit Stratford-upon-Avon and not visit this house, regardless of cost!?

Nash's House and New Place: Shakespeare's home was in New Place and is no longer standing - next door Nash's House has been refurbished to be as similar as possible to the original house at New Place, while New Place now contains an attractive garden.

Gower Memorial and Bancroft Gardens: this memorial, surrounded by four statues of characters from Shakespeare's plays, is in a pretty garden setting on the banks of the River Avon.

Shakespeare's School: the school building is quite a modest Tudor building on two levels, now part of the local Grammar school - the original classroom is upstairs.

Hall's Croft is named after Dr John Hall, physician married to Shakespeare's daughter. This gives the property owners (the Shakespeare Birthplace Trust) the opportunity to present various medical equipment and methods as used in Tudor times. If nothing else it will help you appreciate modern medicine!

Holy Trinity church: final resting place for Shakespeare and Anne hathaway, who are buried inside the church along with daughter Susanna. you can also see the original church records for Shakespeare's birth and death. 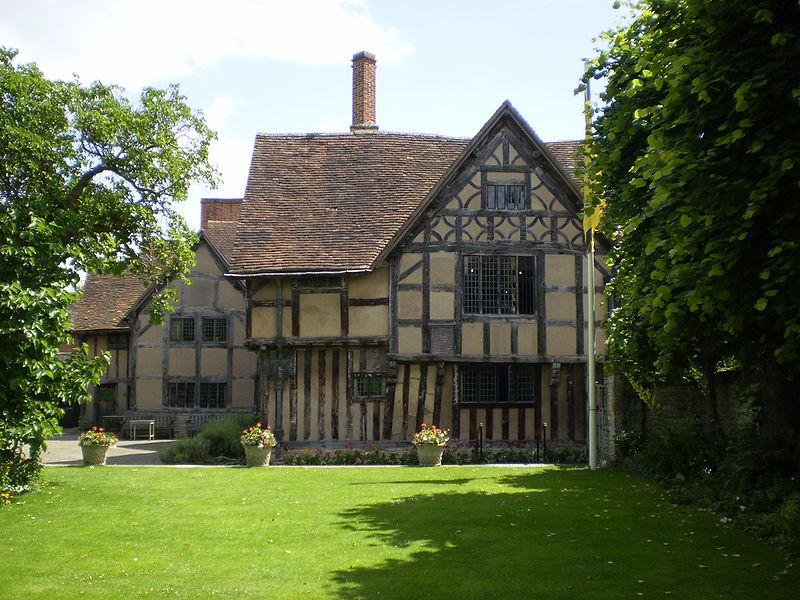 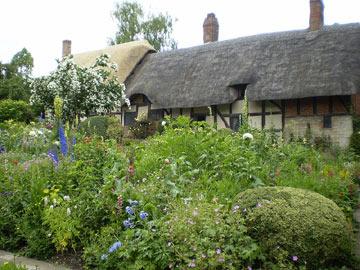 If time permits and there is a production when you visit, the Royal Shakespeare company is also based in Stratford-upon-Avon plays are performed at the Royal Memorial Theatre and the Swan Theatre.

Popular non-Shakesperean activities in Stratford-upon-Avon include a visit to the Butterfly Farm and a boat trip along the river.

Near to Stratford-upon-Avon you will also want to visit Anne Hathaway's House in Shottery and Mary Arden's Farm in Wilmcote - the former is a picturesque cottage in a romantic setting, while the latter is a re-enactment of a typical Tudor farm (Mary Arden was Shakespeare's mother)

Map of Stratford-upon-Avon and places to visit

See more places nearby in the Warwickshire guide