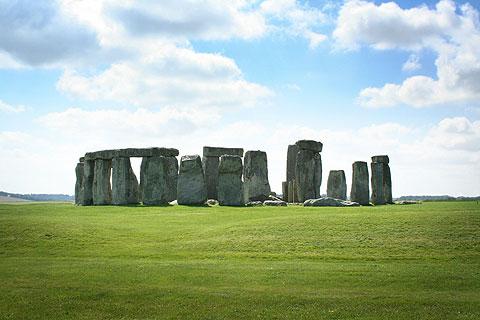 The extraordinary stone circle of Stonehenge is unique in the world. Since 5,000 years ago it has attracted fascination and visitors, held in awe by its mystery and setting. It forms the centre of a large number of prehistoric monuments and burial mounds located in the area.

The formation at Stonehenge was built over an extended period of time - possibly as long as 1500 years, to be completed toward 1500 BC. It is also the most complex stone circle to be found anywhere in the world.

What we see is tantalisingly only a portion of the original, which was perhaps twice the size. Tourists and ancient builders have each played their role in the shrinkinh of the circle.

The ditch around the ancient monument was originally dug using antlers and animal bones, for reasons that are still unknown. Originally this ditch would have been water filled.

It was around 4,500 years ago that the wooden Stonehenge was rebuilt with stones, at this stage 'smaller' stones. The stones came from far away places eg in Wales - we can only wonder at the reasons for this, and the extraordinary effort that must have been involved, since the stones weigh up to five tonnes each.

The larger stones arrived a few hundred years later again, from Marlborough Downs, and at last a Stonehenge was in place that we might recognise today. The practicalities of how it was possible to raise the stones upright, or to put horizontal stones on top, are still unknown - suffice to say that they weigh up to 45 tonnes each, and it would be a significant challenge even with modern machinery.

The reason for the circle also remains an enigma - religious reasons, sacrifice, or for astronomical purposes, are the most common suggestions although there is little evidence to support any of these theories. Theories relating to druids and the summer solstice are also very popular.

The mystery of Stonehenge is a large part of its appeal, along with its uniqueness, even among prehistoric monuments.

Stonehenge was listed as a UNESCO English Heritage Site in 1986. It is located near Salisbury in south-west England.

Map of Stonehenge and places to visit