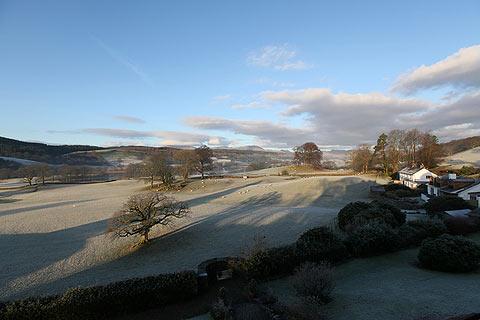 The villages of Near Sawrey and Far Sawrey are situated in the heart of the Lake District, to the west of Windermere heading towards Hawkshead.

Both Near Sawrey and Far Sawrey are very small, with little in the way of facilities beyond a couple of teashops and pubs and a village shop but are very picturesque and in a lovely setting. Far sawrey also has an unexpectedly large Victorian church.

The reason the Sawrey villages attract attention, apart from their location, is their association with Beatrix Potter who lived in Near Sawrey from 1905 and used various locations from the villages in her very popular children's books. As a result many visitors like to see the 17th house where she lived at Hill Top and the associated gardens - the property is now maintained in the same condition as it was when Beatrix Potter lived there and is owned and managed by the National Trust (see National Trust: Hill Top for visitor details).

Things to do Near Sawrey

If you prefer to leave your car behind there is a path that leads from the ferry stop on Lake Windermere to Hill Top (or from Hawkshead if you are arriving from that direction). Another popular local walk leads to Claife Station, on the hill near Sawrey and close to the lake with good views across Lake Windermere to Bowness. The substantial remains of Claife Station are a reminder of just how long the Lake District has been popular with visitors - it was built around 1790 and very popular in the middle of the 19th century.

Esthwaite Water is a little to the west of the Sawrey villages and much quieter and with less facilities than Lake Windermere.

Map of Sawrey and places to visit