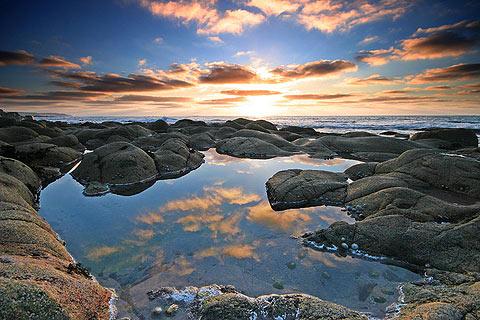 The town of Saint Just is situated at the far end of south-west Cornwall, a little way to the north of Land's End - this location makes it the most westerly town in Britain.

The history of the town is heavily linked to the Cornish mining industry, and there are several early mine buildings in the region including one in an impressive coastal location at Cape Cornwall to the west of Saint Just. It forms part of the Cornwall and West Devon Mining Landscape, a listed English heritage site.

In the town itself, the 13th-14th century Church of Saint Just is interesting for a painting of St George and the Dragon it contains, while the King's Arms next to the church is an excellent place to relax! Elsewhere the buildings are mostly constructed in the local granite, and there are a variety of shops and cafes etc. and some interesting local art galleries. The open green area next to the clocktower is known as a 'Plain an Gwarry' - a place where open air plays were traditionally held (I am told that traditional plays are still occasionally acted here, but haven't seen one myself).

There are numerous small villages and hamlets to discover around St Just (including the recommended Morvah and Sancreed, also the village of Botallack, home to the farmhouse used in the filming of the television series of Poldark), and many walks both along the coast and inland to see more of the beautiful landscape - it is well placed for exploring this far reach of western Cornwall.

Photo note: photo taken in Cot Valley, near Saint Just, Cornwall, a glacial valley with smooth, rounded rock formations and a stream that continues to the Atlantic - the rocks are quite unusual and of scientific interest to geologists. Just plain pretty for the rest of us.

Map of Saint Just and places to visit