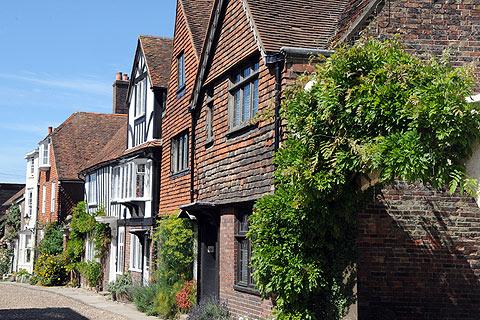 Rye is in the eastern part of east Sussex, north-east of Hastings and close to the English Channel coast (the sea has receded since Rye formed one of the important trading ports with France, known as the 'Cinque Ports'). It is slightly raised above the surrounding Romney Marsh region.

Your visit to Rye will focus around the historical centre, traditionally a haven for smugglers who gathered at the Mermaid Inn, a pretty half-timbered inn on Mermaid Street, one of the most picturesque streets in Rye. It is now a very well conserved and picturesque area of mostly medieval and Georgian houses spread along pretty cobbled streets.

Mingled among the streets are an interesting mix of small shops, galleries, cafes and pubs, all combining to make Rye a fascinating town to explore (and popular tourist destination).

There are several particularly interesting buildings to discover as you explore, including the Ypres Tower (now including a local museum) and the defensive walls of the town, the 14th century entrance into the town at Landgate and the Norman Church of Saint Mary (includes stained glass windows by William Morris, and a clock with two golden cherubs that strike every quarter hour) you can go up inside the church tower for nice views across the town and surrounding countrside. Other notable landmarks include the 17th century Old Grammar School on the High Street, and a 16th century Old Hospital.

The Heritage Centre on Strand Quay in Rye is also recommended, with the history of the town being brought to life in a detailed small-scale model of the town.

Winchelsea Beach and Camber Sands are a couple of the popular beaches close to hand.

Map of Rye and places to visit