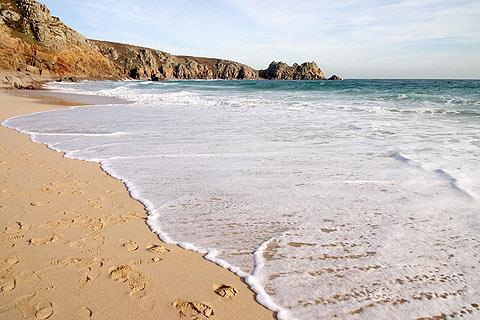 Porthcurno is a beach close to the village of Saint Levan on the coast of south-west Cornwall just a few miles from Lands End.

It's location and backdrop of cliffs, along with it's south facing aspect, make the sandy Portcurno Beach very attractive to visitors - the substantial headland to the east is called Logan Rock. You will find a cafe, restaurant and toilets but little else in the way of facilities. The beach is supervised by lifeguards during the summer season. 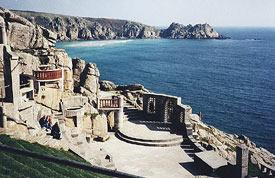 Just west of Porthcurno is an unusual theatre set in the rocks on the clifftop called the Minack Theatre. Built in the 1930's almost single handedly by a lady called Rowena Cade, the theatre has gained quite a high reputation and is a spectacular location to watch a performance - check locally what is on when you visit. In any case it is well worth visiting just to see the theatre even if there is no event to watch at the time you visit Porthcurno (the summer season at the theatre runs from May to September).

For more than 100 years starting from 1860 Porthcurno was an extremely important communication centre, as underwater telegraph and communication cables connected Britain with the rest of the world were laid starting from here. As well as the original telegraph buildings and a museum explaining the importance of the telegraph wires you can also see the tunnels that were dug by miners during the Second World War to house and protect this vital communications centre, and a more recent addition - the sculpture garden, that features large sculptures broadly based on the science behind the telegraph system.

Map of Porthcurno and places to visit