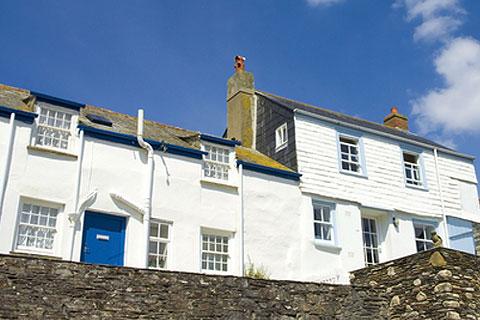 Picture postcard pretty, Port Isaac has all the ingredients you look for in a traditional Cornwall fishing village - the boats bobbing in the harbour, the whitewashed houses looking much as they did hundreds of years ago, and lots of narrow alleys to explore, lined with more lovely ancient houses, leading up the hill to the side of the harbour.

Althought the village dates back further (to the 14th century at least), it was during its heyday as a port during the 18th and 19th centuries that most of the current buildings were constructed.

Port Isaac is another of the small fishing harbours along the north coast of Cornwall that lost much of their trade with the coming of the railways 100 years ago.

The once thriving port once had busy trades in pilchards, timber and slate, among other things - now a small fishing industry continues but tourism is the main industry here.

There are plenty of facilities in the village for visitors - pubs, gift shops, restaurants etc - but it is less touristic than some and is very 'authentic' in nature - as confirmed by the large number of times the village has been used as a film or television stage set (Doc Martin with Martin Clunes; Saving Grace; and The Shell Seekers are recent productions, and Poldark is one of the first.)

Place to visit near Port Isaac

Map of Port Isaac and places to visit