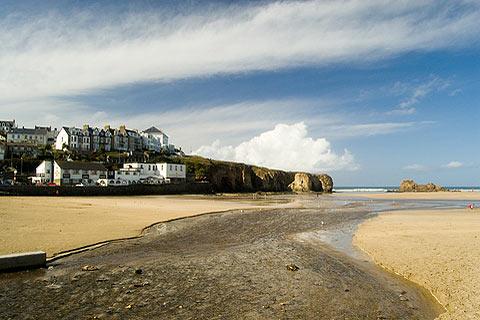 The village and beach of Perranporth are situated a few miles south of Newquay, on the coast of north-east Brittany.

Best known as a family beach resort, Perranporth beach (called Perran Beach) is long, sandy and popular with both bathers and windsurfers. It extends for about two miles between Ligger Point and Droskyn Point, and is backed mostly by cliffs towards the south and sand dunes towards the north. There are also lots of rockpools to explore, and it is one of the most popular beaches in this region of Cornwall (there are various campsites, holiday parks etc enabling visitors to stay nearby). The beach is supervised by lifeguards during the summer months.

There is little of great interest in Perranporth village itself, although you will find all the facilities you need and plenty of restaurants, cafes etc. The most important historical building is the 19th century Saint Michael's Church.

There are various traces of earlier occupation to be discovered as you explore, including an Iron Age camp at Piran Round; the ancient stone Saint Piran's Cross; and the ruins of a 12th century church. An early celtic monastery lies buried under the sands, believed to have been founded by Saint Piran, patron saint of Cornwall - once excavated, it was subsequently reburied to protect it from the sand dunes destructive powers and now all you can see is a memorial noting its existence (it remains a popular pilgrimage destination). There are also vestiges of the region's historical mining industry (important in the 18th-19th centuries) to be seen as you travel around.

Up on the headland to the south, a more recent addition is a substantial sundial called the 'Millennium Sundial'.

You can follow the South-West coast path in either direction from Perranporth - the rocks and cliffs are more dramatic if you head towards the south.

Note: large parts of the north Cornish coast resound with the echoes of Poldark, the popular novels (later televised) of Winston Graham. It was here at Perranporth that the first of these novels was written.

Map of Perranporth and places to visit