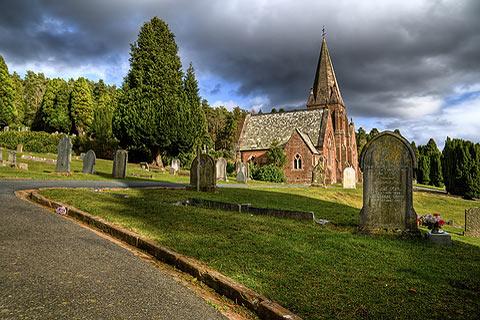 Penrith is a market town in Cumbria, just outside the western border of the Lake District National Park and in the Eden Valley. This position makes it popular as an access point for visitors to the Lake District.

A popular local centre Penrith has an an interesting centre based around its open market square, with some attractive buildings to enjoy as you explore, such as the clocktower (1861), and an extensive range of shops. In the region around the main square there are many smaller streets lined with more traditional ans specialist shops and picturesque houses. There is also a wide range of hotels, guest houses, restaurants and pubs in Penrith.

Be sure to stroll into the yards, the small areas behind the main streets that are accessed by alleyways, for a sense of the history of Penrith.

Note: William Wordsworth went to the Dame Birkett school in Penrith while living in a house in Devonshire Street.

The main monuments within the town itself are the Church of Saint Andrew (18th century with a 13th century tower) - note the cemetery which is said to be the burial place for King Owen of Cumbria and contains some parts of an ancient Norse Cross (920 AD); and the ruins of Penrith Castle (15th century) in Castle Park, a nice place for a picnic while the children run around...

Things to do close to Penrith

One popular attraction close to Penrith is the substantial ruins of Brougham Castle, in a scenic setting to the south of Penrith, while on a clear day it is worth walking up Beacon Hill to the north of the town for far-reaching views across the town and to the mountains of the Lake District. For many centuries Beacon Hill was an important site for alerting residents of impending attacks by the Scots.

The Eden Valley itself, while not offering the drama of the Lake District, is a very scenic location in itself falling between the Lake District and the Pennines and with several attractive villages.

Map of Penrith and places to visit