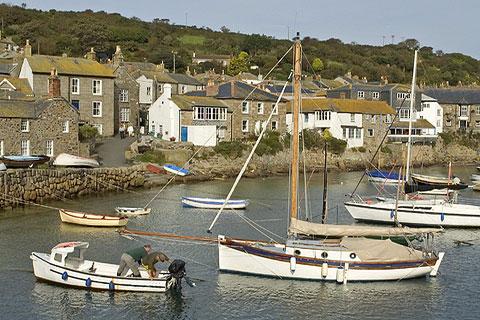 Mousehole is a Cornish village to the south-west of the county near Penzance.

Mousehole is a small village with a long history dating back to the 13th century, and based around its attractive harbour - for more than 700 years the centre of life in the community (although the entire village except one house was destroyed by the Spaniards in 1595, so what we see now dates from that date onwards).

Dylan Thomas and his wife were attracted to the village, which he described as 'the loveliest village in England'. Well, competition would be tough for the title, but you get the idea and mousehole is very picturesque.

You can sit in the corner of the Ship Inn pub, where Dylan Thomas used to sit, and decide for yourself.

Apart from the harbour, be sure to explore the narrow lanes that wind through the village, passing small art galleries and restaurants etc en route.

There is also a small beach in the harbour, very popular among the families that come in ever increasing numbers to Mousehole during the summer months.

Note: tragedy hit the village in 1981, when the Penlee lifeboat manned by villagers from Mousehole sank, losing all eight members of crew.

Map of Mousehole and places to visit