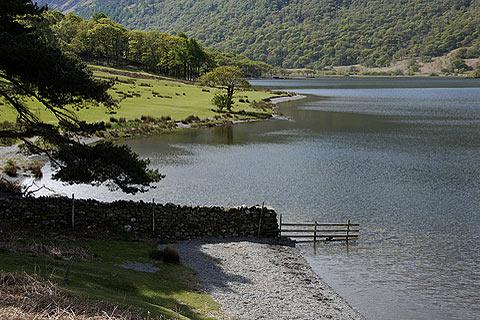 Loweswater is the most north-western of a 'string' of lakes in the western Lake District, with Crummock Water and Buttermere being the others.

There is also a small village of the same name next to the lake, with few facilities but it does have a 19th century church...and a very welcome pub serving traditional beer and food!

Unlike the neighbouring lakes, Loweswater is surrounded by gentle hills rather than dramatic mountains providing an interesting contrast when you visit the region. It also means that the relatively small Loweswater (it is about 1 mile long by half a mile wide) is less visited by tourists than many of the lakes further to the east.

The best way to explore Loweswater is to follow the path around the shoreline - the path also passes through a wooded area called Holme Wood where you can see the very pretty Holme Force waterfall. Rowing boats are also available for hire on the lake.

Note: one curious geological feature - water from Loweswater flows 'inland' towards Crummock Water rather than out to sea as might be expected, given its relative position.

Map of Loweswater and places to visit