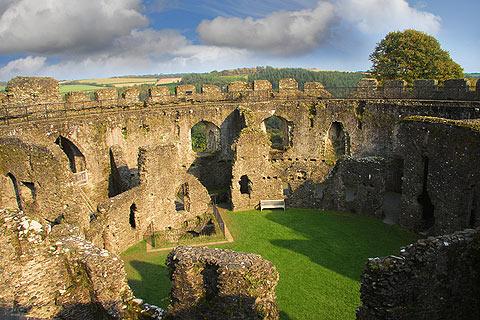 Lostwithiel is situated in southern Cornwall at the northern end of the Fowey estuary, north-east of Saint Austell and north of Fowey (which stands at the southern end of the Fowey River estuary). It's position, slightly inland, makes it well placed for exploring both the coast and coutryside of this part of south-east Cornwall.

The two most important events that shaped the towns history are (a) being established by the Normans, under the watchful eye of Restormel Castle, as a centre from which to export locally mined tin and (b) a battle between the royalists and parliamentarians that took place here in 1644 and caused a lot of damage in the town - hence many building date from the following century. The Lostwithiel Museum explains the history of the town.

Set in attractive rolling countryside with small fields, ancient hedgerows and woodlands, Lostwithiel is a small traditional Cornish town that is a pleasure to amble around exploring. It has all facilities and a wide range of shops, art galleries, cafes - Lostwithiel is also a treasure trove for antique hunters, being well known for the number of antique shops to be found in the streets and the old Duchy Palace.

Among the highlights in the town are a pretty medieval arched stone bridge (a 14th century rebuilding of an earlier bridge) across the Fowey river and the Church of Saint Bartholomew, dating from the 14th century (although the tower is even older) - note the impressive decorative spire, then step inside to see the carvings around the font, both these highlights dating back to the 14th century. See also the part of the Duchy Palace that remains (it was partly destroyed during the fighting in 1644)

An interesting monument can be seen nearby at Restormel Castle, in a raised postion overlooking the valley. The views are best from the castle ramparts. This 12th century Norman castle (much transformed in the 13th century to be more comfortable) is very unusual in being almost perfectly round, and there are sufficient ruins within the walls to evoke the original building and its important medieval status.

The remarkable gardens of the Eden project are a few miles to the south-west (direction Saint Austell).

There are numerous options for walks and exploring near Lostwithiel, including trails throught the Coulson Park nature reserve to the south of Lostwithiel.

Map of Lostwithiel and places to visit