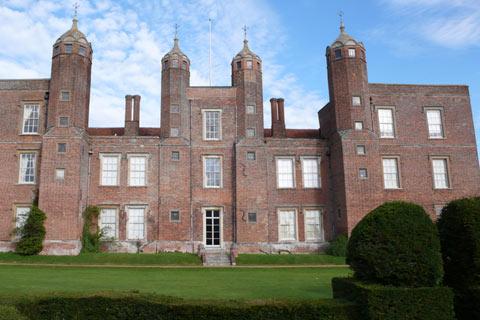 Long Melford is a village situated in south-west Sufflok, near the border with Essex and a little north of Sudbury.

With much of the local wealth accumulated due to the important local wool trade in the Middle Ages, Long Melford is best known for its substantial church, the attractions of the village itself and for the close proximity of a couple of stately homes - each of which contribute to making it one of the most popular villages with visitors to Suffolk.

The village itself is stretched out along a long village green and the River Stour, with the centre around Westgate and Hall Street. The buildings along Hall Street are a particularly interesting mix, including medieval half-timbered buildings intermingled with more recent Georgian and Victorian houses.

Long Melford Holy Trinity Church stands at the end of the extended village and dates from the 15th century (although part of the tower is 19th century). It was built in the perpendicular style popular at that time (see also nearby Lavenham), using money generated by the local wool trade. The elaborate external decoration of the church contains an unusual mix of limestone and flint (a design called 'flushwork' because they are flush with each other). Note particularly the Lady chapel and the Clopton Chapel, and some medieval stained glass windows, and the adjacent almshouses.

The tourist industry is well catered for in Long Melford, where you will find a range of shops, restaurants, hotels etc. that is very impressive given the size of the village. Long Melford also has a reputation for the number of antique shops and art galleries to be found here.

The two important stately homes near Long Melford are Kentwell Hall and Melford Hall. Kentwell Hall is a photogenic Tudor mansion surrounded by a moat, gardens and park lands - there is also a small 'rare breeds' farm to visit at Kentwell Hall. Melford Hall is a 16th century stately home in red-brick, now owned and managed by the National Trust - one interesting feature is the bedroom of Beatrix Potter, a relative of the owners and visitor to the hall.

Map of Long Melford and places to visit