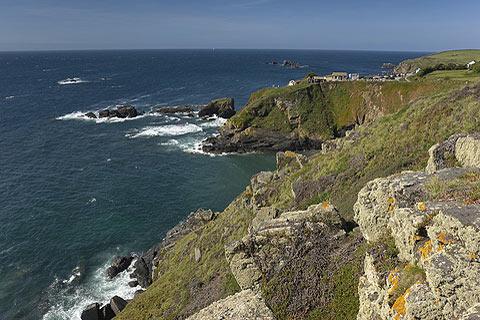 Lizard Point is a dramatic headland situated at the southern end of the Lizard peninsula and just south of Lizard village.

The most southerly point in mainland Great Britain (the Scilly Isles extend slightly further south), it attracts visitors because of the impressive coastal scenery to be found around the headland. You will also see the unusual local stone called serpentine, a dark green rock very characteristic of the area (also seen in many of the local gift shops which frequently sell items carved from serpentine).

On the headland itself there is a lighthouse (called, not surprisingly, Lizard Lighthouse!). A lighthouse has sttod here for more than 250 years to keep ships away from the perilous coastline, and there is now a small museum with exhibits relating the history of the lighthouse.

There is fine scenery in all directions around the coast, but if you only have time for one walk along the coast head west to nearby Kynance Cove, about 2.5 miles each way. One of the most scenic spots on the whole Cornish coastline, Kynance Cove has a small beach backed by dramatic cliffs and has been a popular attraction since Victorian times.

Map of Lizard Point and places to visit