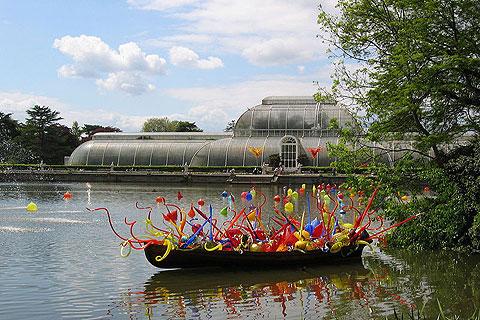 The Royal Botanic Gardens at Kew are located in Kew near Richmond, in south-west London.

Much more than a series of gardens, Kew has an extensive and fascinating range of plants, buildings, structures and exhibits that will interest even the most ardent non-gardener. It is also an important research and education facility.

To give you an idea of the extent of the Kew botanic gardens, it covers 300 acres, has 700 employees, and earns about $60 million a year from more than 1.5 million visitors. This is no ordinary garden!

Although it is the 'whole experience' of Kew that provides the most lasting experience, there are numerous attractions and important plant collections, several of which should feature highly on the list for a visitor.

Various art and other exhibitions are also sometimes held around the gardens.

Kew Gardens have been a listed UNESCO World Heritage Site since 2003, a well deserved accolade given the historical importance of the location.

The botanic gardens at Kew are carefully designed to be a place to wander, to explore and to enjoy yourself. Allow plenty of time to just sit and relax while soaking in the atmosphere. The highlights vary with the seasons, because of ever changing leaf colours and flowering patterns. These include: 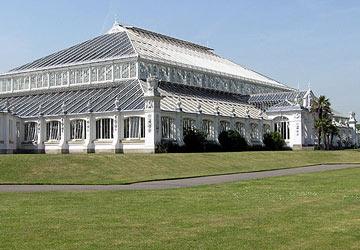 There are numerous highlights among the buildings at Kew, some old and some modern. Among the best known are the two extensive Victorian greenhouses:

- Palm House - impressive use of wrought iron and glass, built in the 1840's

- Temperate House - the largest Victorian greenhouse in the world.

- The traditional Japanese house known as the Minka House -  small and perfectly formed, in the bamboo gardens

The most common way to reach Kew Gardens is on the London Underground District Line, Kew Gardens station. There is also an over ground (mainline) train station nearby at Kew Bridge. Buses are also frequent. It is possible to drive to Kew Gardens but the car park is of limited size and at popular times you may have difficulty parking.

To make the most of your first visit to Kew Gardens you might like to join one of the guided walks that are available - these are of varying lengths, instructive, and a useful introduction to the gardens.

The gardens are very extensive and you should allow at least half a day for your visit - if you rush around in 30 minutes you might get a glimpse of the highlights but you'll be missing the whole point of the exercise...

Several cafes and restaurants are on site to help replenish your energies!

Map of Kew Gardens and places to visit