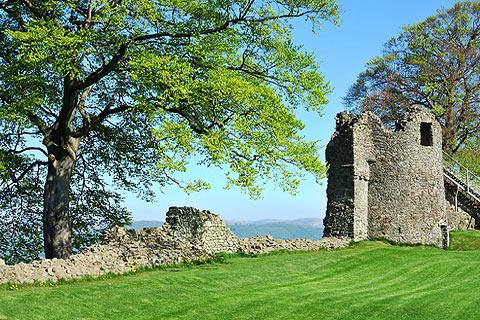 The town of Kendal itself has much to enjoy, with an extensive shopping centre and several buildings of historical interest to discover, as well as numerous 'tourist-focussed' businesses such as pubs, cafes, hotels and restaurants and various art galleries and museums of local interest.

One particular characteristic of Kendal is the many alleys leading to small open areas called 'yards', and adding to the interest of a visit as you can always discover something new among the small traditional houses and businesses in the yards - they are numbered and accessed from the high street in Kendal. Many of these were historically the 'production areas' for the shops that lined the main street.

Among the most interesting historical monuments are the 18th century Church of Holy Trinity (rebuilt on the site of a 13th century church), in an attractive riverside location; and the ruins of Kendal Castle. Although little remains of the 12th century castle that was once home to Katherine Parr (sixth wife of Henry VIII) except for the wall that surrounded the castle and one tower the ruins are evocative and the views from the castle are impressive.

Apart from the shops that line the high street and the central part of Kendal, there are also a selection of shopping centres to be found.

Blackhall Yard shopping area is based in a yard off Stricklegate and features a selection of 'one-off" type shops, while the more modern Westmorland Shopping Centre is also found in the centre of the town and includes an extensive selection of high street shops. K-Village shopping Centre is a well known regional centre for shops offering well known brands at discount prices.

Some other Kendal highlights

- Kendal Museum has a lot of information and artefacts relating to Kendal castle and other historical stages from the town's long and colourful history.

- The Abbot Hill Gallery is housed in a fine Georgian townhouse and features paintings by severable notable English painters such as Ruskin.

- The Museum of Lakeland Life looks at life in the region over the last 300 years and feature, among other things, recreations of typical rooms from across the centuries

- For somewhere quiet to explore without setting out for a major walk visit the Serpentine Woods at the edge of Kendal, where you can walk in peace through the woodlands.

Nearby Levens Hall is a substantial Elizabethan manor house with some ornate rooms inside and surrounded by carefully maintained gardens, especially well known for the topiary gardens, established in the 17th century.

Map of Kendal and places to visit