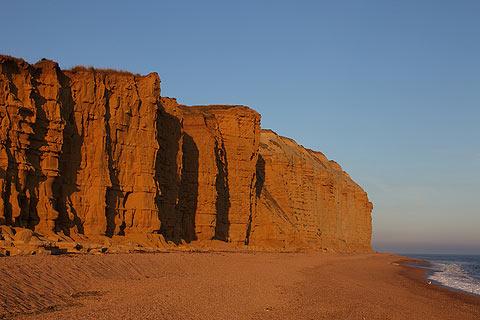 Running along the coast of Dorset and east Devon, the Jurassic Coast runs a little over 150 kilometres from Orcombe Point (near Exmouth in Devon) to Old Harry Rocks (in Dorset close to Swanage).

The coast offers some spectacular scenery with dramatic cliffs, both sandy and rocky beaches, and all backed by the rolling landscapes of the Dorset countryside, with towns and villages mostly being in the places where the cliffs are interrupted by river estuaries.

One of the great attractions of the region is in the variety in the scenery of the Jurassic coast, with impressive rock formations in the sea such as Old Harry Rocks and the immense stone archway at Durdle Door, some sections of high vertical cliffs such as Burton Bradstock cliffs at West Bay and other sections where the cliffs gave way to gentler valleys leading to the sea. There are many places with fine views, including Golden Cap, the raised headland between Charmouth and West Bay, that has one of the best views along the Jurassic coast.

It is because of this variety, which puts on display 185 million years of history, and the many important fossil sites along the cliffs, that the Jurassic Coast has now been listed as a UNESCO English Heritage Site. (Geologists note: the rocks are from the Triassic, Jurassic and Cretaceous periods.)

Towns and resorts along the Jurassic Coast

The above are some of the most popular resorts and towns situated within and along the edges of the Jurassic Coast region that provide access to the region (listed above heading from west to east along the coast). Note: the places shown above from Budleigh Salterton to Axmouth also fall within the East Devon AONB (area of outstanding natural beauty).

Exploring on foot and by boat

Enthusiasts will want to walk the South-West Coast Path which follows all the way along the Jurassic Coast, while others might prefer to explore slightly shorter sections! Whichever category you are be sure to allow time to walk some distance along the coastal path, it is the best way to enjoy the stunning coastline of the Jurassic Coast even if you only walk a short distance...

...except perhaps for one of the many boat trips that operate from the towns along the coast, and provide another great way to enjoy the scenery!

Note: several of the places along the Jurassic Coast also fall within the East Devon Area of Outstanding Natural Beauty - see East Devon

Map of Jurassic Coast and places to visit