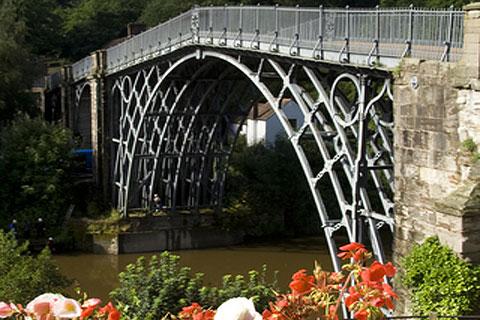 The Ironbridge Gorge is located in Shropshire, on the River Severn.

The gorge is named for the impressive ironwork bridge that stretches across the valley, dating from 1779 and now one of a few listed UNESCO World Heritage Sites in England. It is fitting that this famous iron bridge be located here, where for many years the extraction of iron ore was one of the main industries.

Revolutionary at the time, it attracted interest almost as soon as it was completed, from both travellers and other bridge builders and engineers. A hotel (called the Tontine Hotel) opened next to the bridge soon after it opened to cater to the sudden inflow of visitors.

The gorge itself is attractive as it follows the river valley and the countryside that lies within the designated heritage site (covering 260 hectares) is carefully managed and protected. It consists mainly of mixed woodland and open grassland.

There are now various educational and informative establishments around the site, including a visitor centre and ten small museums, the whole ensemble managed by the Ironbridge Gorge Museum Trust. These include a recreation of a Victorian town with staff in period costume; Museum of Iron; a Museum of the Gorge and a Coalport China Museum.

The focus throughout is on public involvement, and you will be able to try your hand at a variety of traditional 'Industrial revolution' industries and trades, such as tilemaking. Children will particularly enjoy 'Enginuity', in the Design and Technology Centre, where they can learn all about science and how things work. The site has also become a leading centre for the study of woodland management and coppicing.

Another opportunity to admire the bridge comes with nightfall, when careful (colourful) lighting gives Ironbridge a whole different aspect.

Map of Ironbridge Gorge and places to visit