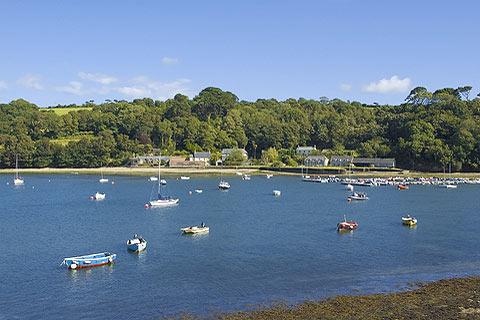 Helford itself is a small village with limited facilities (including a pub), and a few picturesque houses set in the rolling green countryside on the Helford river. It is across the river from Helford Passage, which can be reached by passenger ferry during visitor season (Easter to October).

It is a pleasure exploring along the Helford river and there are several small villages and hamlets to discover in attractive unspoiled countryside: Gweek (a traditional port at the head of the estuary) and Port Navas (on the north edge) are two of the largest. Pleasure boats are also moored at Helford, giving a pretty backdrop to the scene. You can hire a boat from Helford Passage to do your own exploring.

The landscape changes as you travel upstream, from the broader stretches surrounded by fields and with ocasional small beaches to the upper reaches where oak woodlands line the river, and several picturesque creeks that feed the river.

Places to Visit near Helford

One popular attraction (with adults and children alike) is the Seal Sanctuary at Gweek, towards the head of the Helford River, where seals that have become stranded or hurt on the beaches of Cornwall are brought to recover their health before being re-released.

The northern side of the river is also well known for its two gardens, at Trebah (a personal favourite, with sub-tropical gardens heading through woodlands to reach a small beach) and Glendurgan.

Map of Helford and places to visit