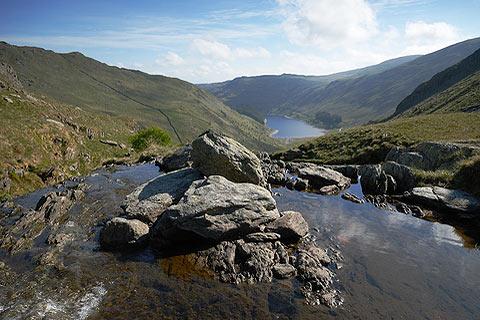 Haweswater is a lake, or rather a reservoir, to the eastern side of the Lake District and south of Penrith - it is the most easterly of the main lakes.

Like Thirlmere 30 years before, the reservoir met great opposition when it was first planned in the 1930's because it involved flooding a very scenic valley and also because there were two villages in the valley - Measand and Mardale Green that needed to be emptied of their inhabitants. There was already an existing lake in the valley, but the reservoir has much expanded it, and Haweswater is now about four miles long and half a mile wide.

Although the villages were largely demolished prior to the construction, it is still possible to see parts of Mardale Green emerging from the water during periods of extended drought.

Haweswater is quite accessible, having a road running along the entire eastern shore, but - being a reservoir - recreational activities on the lake itself are restricted.

While Haweswater lacks the drama of the mountainous backdrop seen at the more centrally situated lakes in the Lake District, it is still a pleasant lake to visit and to walk around, and usually very peaceful because of its location and the fact there are no villages around the lake shores. The nicest section for walking is along the western side, away from the road.

While in this region it is also worth visiting Shap and seeing the ruins of 13th century Shap Abbey.

Map of Haweswater and places to visit