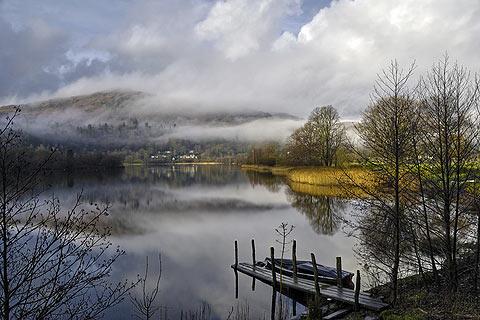 Located at the very heart of the Lake District, Grasmere is one of the most popular villages in the region.

The centre of Grasmere consists of an open square surrounded by traditional granite houses dating from the 18th-19th centuries, and a main road that contains more sturdy buildings (hotels, townhouses etc) from the same period.

The small row of terraced cottages called Church Stile (next to the church) is one of the oldest and prettiest parts of the village and dates from the 17th century.

The village is essentially given over completely to tourism, and there are numerous facilities for visitors to be found in the village, including cafes, pubs, hotels and gift shops etc. These are found predominantly around the edge of the square and along the main street in Grasmere.

Some of these facilities are so longstanding that they have become attractions in their own right - such as Sarah Nelson's Gingerbread shop (in a small building that was previously the village school).

The history of Grasmere has become permanently entwined with that of William Wordsworth, who lived in the village for many years, firstly at Dove Cottage, then (after a period at Allan Bank, and at the Old Rectory) later at nearby Rydal Mount. No visit to Grasmere would be complete without a visit to these two properties (both are open to the public) followed by a look around the churchyard of 13th century Saint Oswald's Church in the village to see the Wordsworth family graves.

Note: the cottage was not known as Dove Cottage until almost 100 years after the death of Wordsworth, when it was bought by the Wordsworth Trust. It is now carefully maintained, including the 'out of control wild garden', almost exactly as Wordsworth knew the house. Wordsworth lived here from 1799-1808, his most productive period, that included the famous 'I wandered lonely as a cloud'.

The literary connections continue to fascinate visitors to Grasmere, including the fact that Sir Walter Scott and Samuel Taylor Coleridge both spent time in Grasmere visiting Wordsworth.

A couple of hundred metres to the south of the village lies Grasmere Lake, which has numerous opportunities for hikers and walkers, whatever the level of ability - from a gentle lakeside stroll to a major expedition into the mountains - many of the famous peaks are accessible from Grasmere including Skiddaw, Helvellyn, Scafell Pikes and Langdale Pikes. A little further along the same valley is the equally scenic Rydal Water.

Hiring boats for a leisurely paddle around the lake is also a popular pursuit for people visiting Grasmere.

Map of Grasmere and places to visit