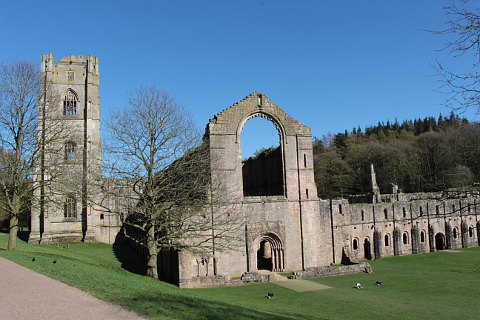 Located in North Yorkshire, the ruins of Fountains Abbey are owned by the National Trust and maintained by English Heritage. Together with the adjacent Studley Royal Garden they are a listed UNESCO Heritage site. The site is quite stunning and well worth a visit.

The history behind the founding of the abbey is interesting - in 1132 there was a disagreement and fighting at the abbey in York as a result of which some of the monks were exiled from the abbey.

Eventually, under the protection of the Archbishop of York, they were granted the right to found a new abbey, in its present location.

The location was ideal, a sheltered spot next to the River Skell, with stone suitable for construction close to hand. It remains a lovely setting to this day, with the river to one site and woodland to the other, in a valley lined by steep cliffs. 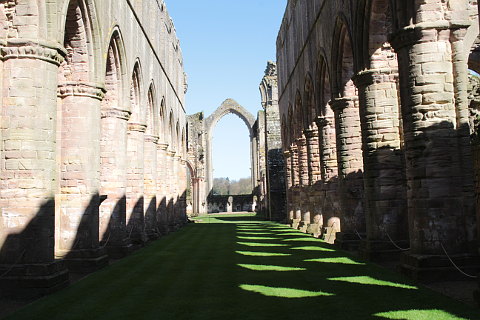 The abbey had a very long active life and was once one of the largest and most powerful abbeys in the country most of the wealth coming from sheep rearing. The abbey was occupied until 1539 at which point Henry VIII dissolved the moansteries across England.

There are several noteworthy features within the abbey, including the monk's quarters (known as the cellarium) with an impressive arcaded / vaulted roof structure; the cloisters; and of course the remains of the main Chapter House itself.

There is a visitor centre selling hot breakfasts and lunches at the Abbey and also a tea room.

The archetypal English planned garden so loved by the Georgians, the Studley Royal Water Garden is a very attractive landscape interspersed with small decorative buildings, statues and follies. The Temple of Piety and the Temple of Fame are among the highlights.

It is the Water garden that makes the park unique, and is very extensive with lake and waterfalls. The water gardens are fed by the Skell river which flows through the valley (and past Fountains Abbey). The central part of the water garden has pools and canals of water in regular shapes and the canal leads to a fishing tabernacle and cascade and into a small lake at one end and up to a rustic bridge at the other. 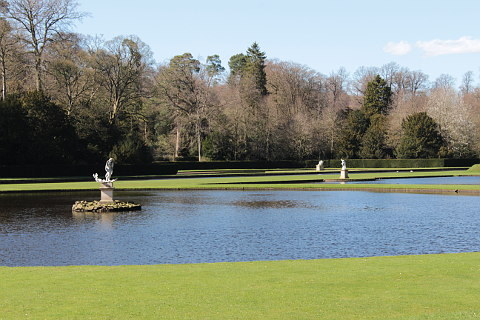 Be sure to follow the walk known as High Ride to reach the lovely view down to the abbey and gardens - this point is known, not surprisingly, as 'Surprise View'...although the name does rather spoil the surprise! There are also a couple of closer viewpoints by the Octagon tower and on the other side of the ponds by Banqueting House. It is well worth going to one of these for an overview of the water gardens.

At the other side of the abbey to the water gardens is Studley Royal Deer Park which is a large wooded park  and a visit on a nice day is a great pleasure - bring a picnic! In the park you can also see Saint Mary's church and next to this is a Chorister's house which is now rented out as holiday cottages.

Fountains Hall is just up the road from the Abbey and park and has a beautiful Elizabethan facade. It also has a herb garden and orchard that you can visit.

Nearby is the cathedral town of Ripon and also the lovely Newby Hall which is great if you are a keen gardener of have children. Harrogate is one of our favourite towns in Britain and is nearby as is the beautiful riverside village of Knaresborough which also has the remains of a medieval castle.

Map of Fountains Abbey and places to visit