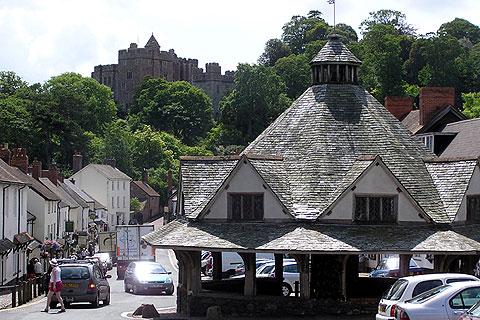 Dunster is a small village situated a few kilometres south-east of Minehead near the Bristol Channel, to the north-eastern edge of Exmoor. Originally Dunster developed as a port town, but over the centuries the sea receded - it is now about 3km away.

There are a very high number of old and medieval buildings to admire - there are approximately 200 'listed' buildings in Dunster. Thes include the dovecote and tithe barn, the Conygar Tower that stands on a hill above the town - and seems to have had no particular function apart from looking impressive - and a functioning 18th century watermill (in Mill Lane).

Note also the unusual open market hall in the centre, that dates from 1609 and was originally a centre for local wool trading.

When you've finished admiring the many historical features and buildings Dunster also has a good selection of pubs (you might like to try the Luttrell Arms, approximately 500 years old) - restaurants and shops.

The traditional church - the Priory Church of St George - once formed part of a larger group of buildings that made up the priory (including the 14th century priests house, and the dovecote).

One highlight of a visit is Dunster castle, which stands above (and dominates) the village. Built on the location of an earlier castle, the current castle dates from the 15th - 17th centuries (the gatehouse is the earlier part), with the gardens and parkland added in the 18th century and the decorative towers added in the 19th.

Both the gardens and the interior of the castle are well worth visiting. It is interesting to note that when the original castle was built there was sea around the bottom of the hill - this had receded by the 16th century. Remarkably the castle belonged to the same family, the Luttrells, for 600 years (1376 - 1976) before being given to the National Trust. See National Trust - Dunster castle for more details. 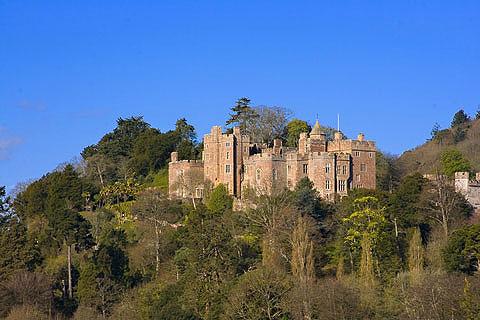 To visit near Dunster

One popular activity among visitors is to take the old steam train that operates here and passes through 30km of the Somerset countryside, with a station at Dunster. See West Somerset railway for details.

Map of Dunster and places to visit