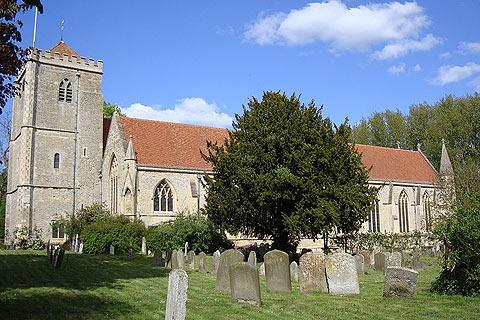 Dorchester-on-Thames is a village to the south of Oxford, near Wallingford in southern Oxfordshire.

Much the most well known attraction here in Dorchester is the abbey, but take the time to also stroll through the village - there are some interesting half-timbered buildings to enjoy in the pretty village, and a couple of pubs where you can take a welcome rest, along with a selection of specialist and antique shops.

The abbey is a Norman construction in the centre of the village and now the village church, that was built on the site of an even earlier Saxon cathedral. The Augustinian Abbey was founded in 1140, and continued as an active monastery until these were suppressed by Henry VIII in the middle of the 16th century.

Highlights within the Abbey church, the part that we can visit today, include some medieval frescoes on the walls and some beautiful stained glass also dating from the 14th century; some fine medieval stone carving and an unusual lead font, said to date from the 12th century. There is also a small gallery displaying further items from in and around the church at Dorchester-on-Thames.

After exploring the abbey, it is enjoyable to take a stroll along the river banks - although you might find yourself waylaid first by the cakes in the Dorchester Tea Rooms...

Map of Dorchester-on-Thames and places to visit

See more places nearby in the Oxfordshire guide