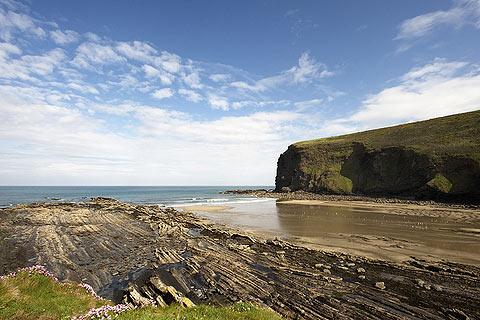 Crackington Haven is a small village and beach on the coast of north-west Cornwall, between Bude and Boscastle.

The beach itself is a mix of rock and shingle, with sand emerging at low tide, in a very picturesque location. There are headlands to both sides of the beach, with impressive views from the cliff tops - to the north is pencarrow Point while to the south is Cambeak Headland.

The small village of Crackington Haven itself stands just behind the beach, and has a pub and a cafe and a few small shops but otherwise facilities are quite limited. The location of Crackington Haven, rather hidden away along narrow winding roads, means it is rarely very busy.

Coastal walks are of course among the most popular activity here at Crackington Haven - for sea-front drama head two kilometres south along the North Cornwall Coast Path to the cliff at 'High Cliff', which plunges 224 metres to the sea below and is the highest cliff in Cornwall - you get great views along the way and great views when you arrive

It is also recommended to spend a little time exploring inland in this wild part of north Cornwall, perhaps including a stroll around Saint Genny's (just a few hundred yards from Crackington Haven) to see the church, and one or two of the other small hamlets. We also enjoyed following one of the marked paths at nearby Treworgie Barton.

Map of Crackington Haven and places to visit