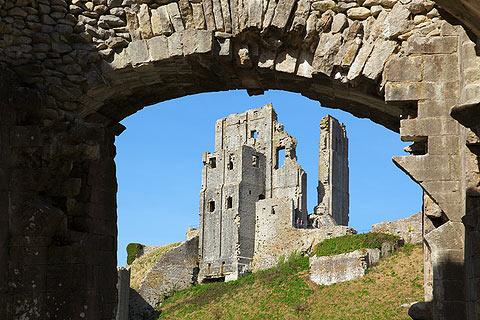 The village (and castle of the same name) of Corfe Castle are situated on the Isle of Purbeck, between Wareham (to the west) and the beach resort at Swanage (to the east). It is a few kilometres inland from the popular Jurassic Coast region, a listed world heritage site that follows the Dorset and east Devon coast for almost 100 miles.

The village of Corfe Castle

The village itself is very picturesque, with traditional stone houses centred around the Church of Saint Edward. Also in the village square a small scale model of the village and castle as it would have appeared at the start of the 17th century makes an interesting thing to see (the castle was destroyed in 1646) and helps give a clearer picture of how the castle once looked.

Around the 'main square' and in the roads that run off it there are also a few gift shops, cafes and traditional pubs. Be sure not to miss the Ginger Pop shop commemorating Enid Blyton, who lived near the village and is said to have based Kirren Castle in her Famous Five adventure stories on Corfe Castle (especially made for those of you like me who grew up reading every single one of her books - I'm less sure that modern children understand references to 'lashings of ginger beer'!)

Another treat for the family - steam train enthusiasts will want to have a ride on the Swanage Railway steam train and visit the quaintly restored Corfe Castle train station.

The castle at Corfe Castle

The imposing ruins of Corfe Castle stand above the village making it instantly recognisable and adding a sense of drama to a visit. Sprawled across a small hill in the valley between higher hills (called, not very imaginatively, West Hill and East Hill), the ruins include one main tower and some substantial sections of wall, enough to give a feeling for how substantial it must have been when it was constructed in the 11th century. There are also lovely views from the castle down the valley towards the sea.

Note: the castle itself is a great place to scramble around exploring but care will be needed with small children and sensible shoes are recommended! It is also a National Trust property complete with tea-room, so you can't go wrong!

Map of Corfe Castle and places to visit