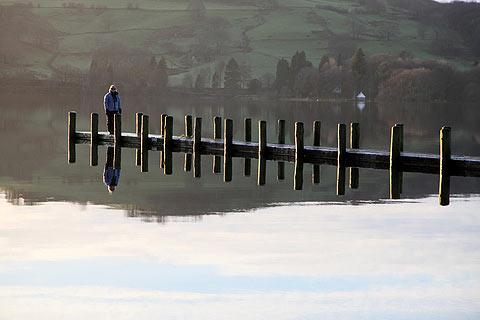 Coniston is a small village in the southern Lake District. The name is also commonly used to refer to the nearby lake, although the lake itself is more correctly called Coniston Water.

The village is situated to the north-east of the lake itself. Like many villages in the Lake District Coniston has its roots in farming and mining but is now firmly focussed on tourism. The village is small and traditional with a selection of pubs and cafes etc. and a very scenic backdrop in the form of the 'Old Man of Coniston'. Coniston Visitor Information Centre is found next to the main car park and should be your first port of call on arriving to find out about local activities and events.

It is for the access to outdoor activities that coniston is most visited, with several popular natural locations accessible nearby. The most well known is the walk to Coniston Old Man, one of the highest mountains in the Lake District and reached by a popular walk. Coniston Old Man forms part of the Furness Fells range of hills with several other peaks above 700 metres.

Another popular destination is the Grizedale Forest, an extensive wooded area to the east of Coniston Water that features numerous marked trails and a visitor centre, childrens play area etc. Scattered through the forest there are numerous modern art sculptures, including some by highly rated artists such as Andy Goldsworthy, which fit very well in the landscape.

One claim to fame in Coniston is the association with the 19th century poet John Ruskin, who lived in a substantial property on the east of Coniston Water called Brantwood - the property is now open to the public as a museum dedicated to Ruskin, and apart from the grandeur of the house itself Brantwood also has exceptional views across Coniston Water to the mountains. When the poet died in 1900 he was buried in Saint Andrew's Church in Coniston.

At five miles long Coniston Water is the third largest of the Lake District Lakes.

Quieter than lakes such as Windermere, there is a passenger boat that tours the northern part of the lake (spring to autumn only) called the 'Gondola' - the boat leaves from Coniston and also stops off at Brantwood for those wanting to visit John Ruskin's house. The passenger boats also offer excursions to the southern part of the lake to discover 'Wildcat island', made famous in the Swallows and Amazons book by Arthur Ransome.

You can also hire rowing boats and motor boats from Coniston if you prefer to explore yourself.

The lake is best known for the many attempts on the water speed record that took place during the middle of the 20th century - first by Sir Malcolm Campbell and later by his son Donald Campbell. Donald Campbell died on the lake in 1967 in a crash during his attempt to exceed 300 miles per hour on the lake using a hydroplane called Bluebird.

Map of Coniston and places to visit