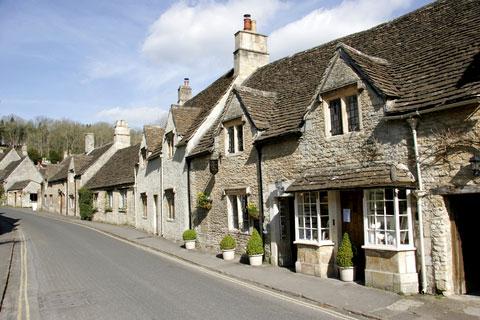 Castle Combe is a small Cotswolds village north-west of Chippenham, in the county of Wiltshire (southern England). The castle from which the town takes its name is no longer in existence.

The village centres around the 'market cross', a building with stone pillars and an ornamental stone carving decorating the roof, dating from the 14th century. It was built to commemorate the town being granted permission to hold a market (these market halls are reasonably common, perhaps more so in southern France, but are usually larger, to provide shelter for market traders). The stone structure just in front of the market cross is there to help horse riders to dismount more easily.

The village is small but perfectly formed, with streets of unspoiled Cotswolds cottages dating back hundreds of years, a quiet river flowing by and under the arched stone bridge, and the 12th-15th century Church of Saint Andrew with numerous carvings and arches.

Tourism is now THE industry in Castle Combe, and it is one of the 'major' sites on every Cotswold tour guide, so arriving early or off-season is recommended. 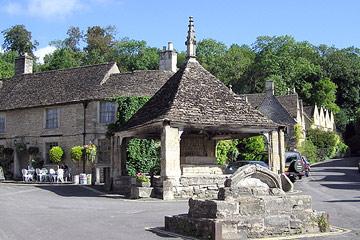 For motor enthusiasts the name of the village is inseperable from the nearby racing circuit. Active since 1950, and once used for Formula 3 races, the course is now used for more local racing events and car events involving rally cars rather than racing cars.

During the 1960's (and subsequently) the village featured in several popular films and television series, including Doctor Dolittle and The Saint. As a result you won't see so much as a televison aerial to remind you that you are in the 21st century.

Map of Castle Combe and places to visit