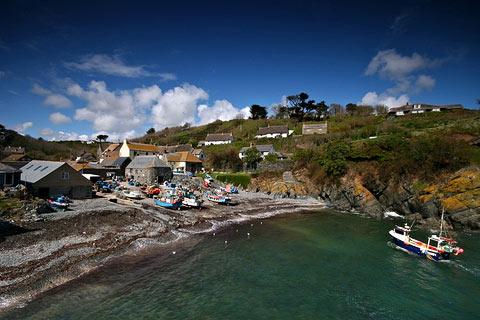 Cadgwith is a village and fishing harbour situated on the Lizard Peninsula in south-west Cornwall, a few miles north-east of Lizard Point where it forms part of the Lizard Heritage Coast.

One of the most picturesque and traditional of the little villages here in south-west cornwall, Cadgwith has some very pretty tradional thatched and whitewashed stone cottages running down the hill to the cove below, and a quaint little blue (corrugated iron!) chapel for the fishermen. All very photogenic so don't forget your camera.

The pub (the Cadgwith Cove Inn) is also recommended, and has for several centuries been the heart of the village for the locals, now also a welcome rest stop for hikers following the coast path around Cornwall and with visitors.

The smaller beach in Cadgwith is used mostly by the local fishermen to 'park' their boats and carry out their trade - pilchards were traditionally caught here but nowadays crabs and lobsters are the main catch. The adjacent beach, which is smaller and sandier, is popular with sunbathers and visitors. The two beaches are separated by a rock outcrop called the Todden - you can stroll out along the Todden for a pretty view of the village.

Cadgwith is also on the south-west coast path which can be followed in either direction for some spectacular coastal scenery. One highlight if you are heading towards the Lizard Point is the cove known as the Devils Frying Pan: the cove was once a cave, where most of the roof has now collapsed leaving a broad natural stone bridge across the 'entrance' (they tell me the Devils Frying Pan is most impressive during winter storms when the waves come crashing in, but it's still very attractive on a summer's day for the rest of us!)

Map of Cadgwith and places to visit