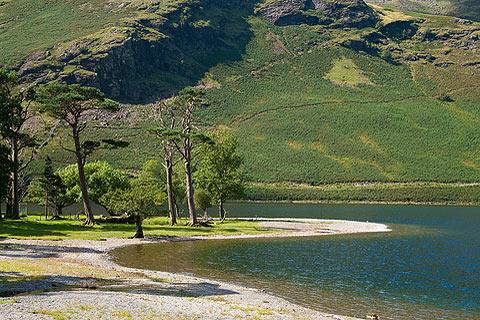 Buttermere is a lake in the western-central region of the Lake District near Keswick and Cockermouth. A very small village of the same name is found at the north-west of the lake on farmland that separates Buttermere from the nearby lake of Crummock Water a little to the west of the village.

The lake is just over a mile long and quarter of a mile wide, and one of the most picturesque in the Lake District, with the dramatic peaks of High Stile, High Crag, Haystacks, Red Pike and Fleetwith Pike among those provising the picturesque backdrop to the lake and village.

There are two ways to enjoy the scenery on foot:

1) follow the path around the lake shoreline, takes around two hours

2) head for the hills! the paths to the surrounding peaks such as Haystacks (a popular and well trodden path leads to the summit) provide very impressive views

The dramatic road called Honister Pass, one of the highest and steepest in the Lake District, leaves Gatesgarth on the south-eastern part of the lake to reach Borrowdale (gradients reach 1 in 4 on the road in places).

Map of Buttermere and places to visit