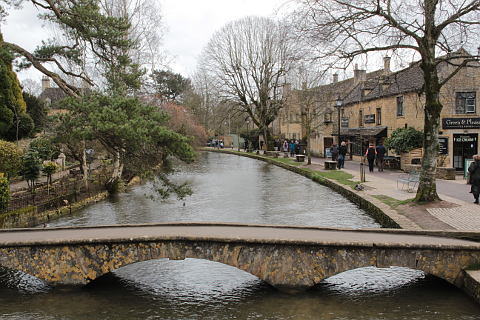 Bourton on the Water Hotels

Visit Bourton on the Water

Bourton-on-the-Water is a Cotswold village in the county of Gloucestershire between Northleach and Stow on-the-Wold (at 6km).

It is very picturesque, a village of traditional 17th century yellow stone cottages, many with period features (mullioned and leaded windows, steep pitched roofs etc) and pretty country gardens, with the shallow River Windrush passing quietly through the village as backdrop (or rather as a centre, since eveyone walks along the river banks). There are shady trees and grassy areas lining both sides of the river, which is crossed by several low stone bridges in perfect keeping with the setting.

Visit Bourton on the Water

If at all possible visit early in the day before the crowds arrive, or outside high season, and remember to wander around actually enjoying the village and its many architectural details and highlights, some dating back to Elizabethan times, before you get diverted into a tea shop or one of various attractions such as Birdland.

Bourton on the Water like so many Cotswold villages is utterly charming. This one is particularly lovely due to its river-side setting and paths along the river which are lined by the oh-so beautiful houses. The village is often described as 'Venice of the Cotswolds' because of the number of bridges - Why ? It has it's own charm but is nothing like Venice! 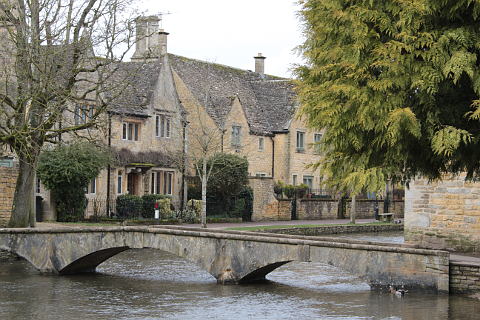 When you have finished promenading along the river banks, and persuaded the children to get out of the water, there are shops, cafes, pubs etc to cater for the (large number of) visitors who come to admire Bourton.

However if you are enjoying walking by the river there is a nice path beyond the villlage and in to the countryside. On the edges of the village there are some very large and beautiful riverside houses to admire!

Bourton on the Water has a lovely village church with an ornately carved doorway and inside it is pretty and light and has a wooden roof and a roof painted with various coats of arms.

One curious attraction in the village - is a model of the village! Reduced by a scale of 10 to 1, the model was constructed in the 1930's and shows the village in great detail (including a model of the model...) Over 70 years old and still very popular, and for reasons I can't quite put my finger on it is very compelling to visit. Location of bourton Model Village is: just behind the New Inn.

Bourton is one of the most visited 'honeypot' villages in the Cotswolds, and is pretty much given over completely to tourism. Several popular attractions have developed around Bourton as a result, including:

- Birdland - a wide range of birds to admire from penguins and flamingos to toucans and owls, and a chance to get involved by feeding the penguins or watching a display by the birds of prey, all in a picturesque setting - see the Birdland website. 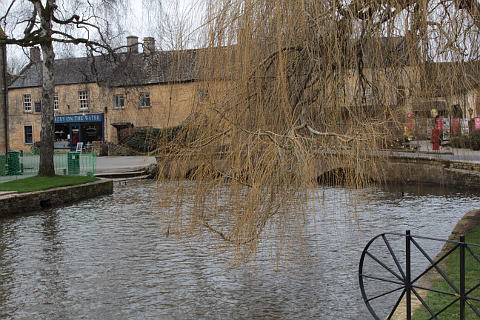 - the Dragonfly Maze: a maze constructed of hedges and with clues to follow en route for the pavilion at the centre of the maze

- other attractions include the Bourton Model Railway, the Cotswold perfumery and the Salmonsbury Meadows Nature Reserve. There is also a microbrewery, the family owned Cotswold Brew Co which can be visited by appointment.

If you have any mobility problems Bourton-on-the-Water struck us as being a good village to choose as it is flat and has fairly wide paths. Many Cotswolds villages are on a hill!

The much smaller but totally charming villages of Upper Slaughter and Lower Slaughter are nearby as is the thriving village of Stow on the Wold which has lots of pubs and restaurants along its high street and makes a good base for a visit to the Cotswolds area.

Burford is a nearby town and reputedly has the prettiest high street in the UK.

Photos of Bourton on the Water

Map of Bourton on the Water and places to visit

Bourton on the Water places to visit